Another day at MM! 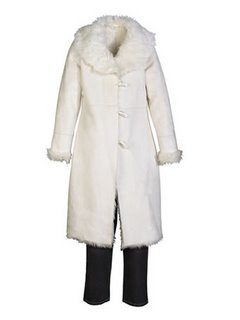 Before I go off on one about MM, let me show you the coat I bought this afternoon!! The on-line shop only has a photo of it in white, but I can assure you, the rich chocolate brown one I bought it even more beautiful!!!

I was late into MM this morning as I had my "VAT Educator" visit, where I was treated (nicely) like an idiot - which when to comes to numbers I am >_<

While I have been away from MM poor Andrea has been getting it thick and fast from the other "ladies" within the company. "She" (now to be known as "Skinny-bitch, or just SB) had been on the phone to Fat-Bitch (FB) most of Tuesday. Neither of them have a clue what's going on and both have been digging.

On tuesday SB asked Andrea to call up the MM web site so she could show Andrea all the places where I am directing people away from MM to BH (Hadn't she already tried that???) and, of cause, nothing did. Nothing ever has! When she couldn't find anything she went mad, insisting that she had been on it the night before and that she had found this link..... I hadn't TOUCHED the MM web site on Monday or Tuesday so that was a blatent LIE!

On Wednesday the poor woman was confrunted by FB (who had split up again with the guy who runs the pub across the road, and had been banging on the door all morning, pissed up from the night before, so she could "get her stuff back"). She was also banging on and on about "what is Glenn doing with the money he's making", "What's Charlie doing?" and various other stuff, to which Andrea replied "I don't know" hee hee hee

It seems the lastest "issue" is the Russian woman Glenn has been talking to on-line. It sounds like it's going very well, and he's hoping to go and meet her in the new year, and if that goes well she might be coming over to the UK for a while. Good for him, she's pretty and young, and if it means he gets out of that house he still shares with FB and gets out fromunder SB's thumb, I wish him all the best. FB can't stand it though, he has this lady's photo on his computer (screen saver or wall papaer or something) so she's seen it and is livid. I suspect THAT has more to do with FB break up with her feller and her "relationship" with Glenn, as she put it. Not to mention at this has also heavily upset SB, who still likes to make out she and Glenn have more than just a proffessional relationship (Don't believe you anymore, you saggy, skinny, loud mouthed old cow).

Poor Darren's also being dragged into it all again too, although he seems to have raised above it all to his credit. Not only are Darren and I having an affair, but he has also been "steeling from the till" because it was £20 down one day. SB even tried to show Andrea "Evidence of a cover up" of £10.... As if! She is also pissed off with him for not telling her his ebay user name (he doesn't even use ebay, hasn't done for about 3 years) and today Andrea was expected to take the Lancaster delievery (SB Told her to), which is MILES out of her way. Maybe she thinks Darren is stealing stock too, and selling it on ebay, just like I'm supposed to be doing??

Another funny thing about all this between SB and FB is that they HATE each other! FB was convinced that Glenn and SB were having it off behind her back when they were still toghether(which SB confirmed, but Glenn has never commented on), SB considers her a loud mouthed gold digging bitch (which she is). Oh, and they both suggest that they both still have sex with him. Dunno if they do or not, I mean, if it's offered to a man on a plate, chances are he'll take it, but some how I think they are both lying! When I voiced my curiosity over their sudden Best-Friendship, Daz said, "they do [hate each other], but they know where they stand with each other", and yes, I guess they do. They are both too shallow and too dumb to be anything other than what they are. Me and Andrea on the other hand, are playing the game better than they are (and winning without trying) and they can only band together now. And are STILL getting no where!

SB has tried - more than once - to split mine and Andrea's friendship up, and failed, and is now convinced that me and Andrea are not friends (all because Andrea pleads ignorance over my non-MM activites). She thinks she has a victory there.... So wrong, so very very very wrong!!!!

One day I shall have to do what I threaten, and actually go into MM on a day when SB is there, and see what happens. But I think I shall save that for a day when I actually have to go out of my way to find some free entertainment. At the moment, it's coming thick and fast without me having to hunt for it!