I was supposed to take the kids out for the afternoon so hubby could crack on and get the job done, only things didn't go according to plan. It started by Jack wanting to go to church this morning. No way I could take all 3 kids, they would run riot! So I agree to take him and hubby stays home with Tom & Georgie. When I get back George is still his his PJs and Tom is half dressed. No worries, lunch first then dressed and off to the park. It's Sunday so it's a roast dinner and takes a while.

As soon as hubby finished his meal he's up and off to sort out the bathroom. I'm impressed! Then I hear "stuff" falling down the stairs. Bits. Lumps. You know, rubble...

Hubby calls down "no one is to come up and down the stairs for ANYTHING!" and I think that's probably a good suggestion. Then it occurs to me... The kids clothes are up stairs. I glance round the livingroom door and up the stairs to assess risking his wrath by getting what I need so I can take them out if the way. All the kids coats and shoes are still on the stairs. Covered in rubble and dust. I think better of it and offer them unlimited access to technology instead!

That'll be a brick then. Falling down my stairs. Yay!

It only takes him an hour to knock my wall down. 2 hours of cleaning later and the dyson dies. We only have the one vacuum. Had. Then it's tea time and the kids need to get ready for bed. Naturally they love it! As I follow them up the stairs to make sure they've sink-washed the brick and plaster dust off their hands and faces, they are waving and cheering at me from where the wall used to be! Instant nightmares for me as I imagine them falling off and breaking their backs on the stairs below.... 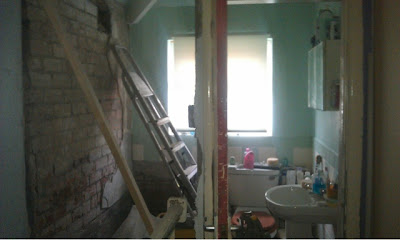 Admittedly it is an almost liberating feeling to use the loo with not only the bathroom door open, but the whole wall missing. I can see he whole of upstairs while I pee! Although anyone upstairs can also see me. Not so much fun. And it's not the ventilation I had in mind for when one I us, ahem, makes a smell, iykwim.

He assures me there will be a wall there by the end if the week. I hope so. We have guests!

He was only supposed to plumb the bloody bath in!