This week there is good news, bad news, and panic worthy news!

Good news is WE FINISHED THE PLANETS & ROCKET! Jack loves his pipe cleaner rings, and I love how he's chosen to mainly decorate the red bits and leave most of the blue, it looks like a super continent and a huge blue ocean! Our version of Apollo 11 is almost indistinguishable from the real deal! (well, maybe not quite, but it does look funky). Actually, I think they ALL look fab, and I finally get them out of my kitchen and off to school which is a bonus I'm NOT going to complain about! 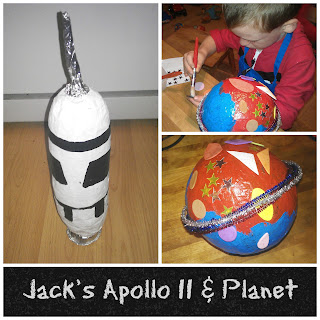 The bad news is that we've LOST the Scrap book!!! Me and the Hubby turned the house upside-down looking for it but it has vanished into thin air. So I'm going to have to help Jack knock another one up before Museum Day on Wednesday. Easily done, but we have no more Planet stickers so it wont be quite as good. Jack's not very bothered, but I'm gutted!

And the Panic.... On Thursday morning I heard from some of the other mums on the school run that we are supposed to be MAKING costumes for Wednesday too. Make. Astronaut, Doctor, or Nurse. We didn't get the letter! No prizes for guessing what Jack wants to be. So I spend most of Thursday in town buying bits and bobs to make this costume. I swear it would be cheaper to buy one. 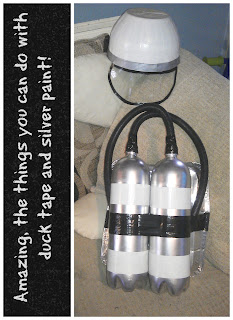 Hubby spent the weekend making a helmet out of a mixing bowl, and a pop bottle. It's pretty cool! Jack loves wearing it already, and when he wears the hood up on the clothes that will make up the rest of his suits it works really well!

I've made an air tank out of some pop bottles and a disposable roasting tin (which Jack insists is a rocket pack) and we're on with customising a grey tracksuit with duck tape and NASA badges.

It's not exactly accurate, but it is a lot of fun! I'll be sure to post a picture of him in his costume before he goes off to school and trashes it!

Would have been so much easier to go with "doctor"