"I have to take that wall out"

He has been itching to knock a wall down in this house for as long as I've known him. From wanting to move the kitchen door (its fine where it is!) to making a new back door (that opened in to thin air coz we live on a hill) to making a window for the landing (nice idea but no way HE'S doing it) it's been a constant. Must be a man-thing. I have NO desire to knock walls down in my own house, ever. I like my walls. They keep the roof on!

And until now I've held him off.

Story is this; the bath broke. It split and needs replacing. A pain but not the biggest deal in the world. I had hoped that maybe a new bath would also mean we could finally get rid of that smelly old carpet and maybe even change the bathroom tiles. But it has become sooo much more. The new bath has been in the livingroom for 2 weeks. The old bath has been pulled out and stood on its end for over a week. It went in the garden this afternoon.

He wanted to only take down and replace half the tiles.... No! The bathroom should look better not worse! All or nothing! So he huffed but bought some tiles to do the whole bathroom. Now he's up there taking the rest of the old tiles out. And half the plaster with it. Although to be fair anyone who's read my posts on DIY will know the plastering in this house is shocking. 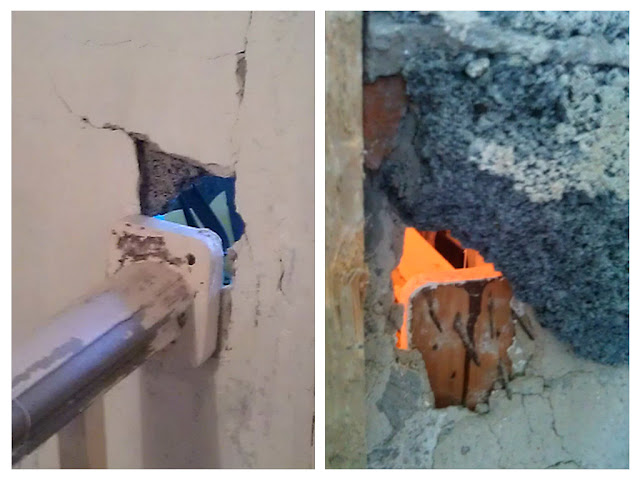 It's been while he was removing tiles from the internal wall, the one over the stairs, that he has decided he needs to take a wall out. Behind the plaster is just cinder block. And he says its just falling a part, that there is a hole where the banister had connected to the outside of the bathroom wall. "It's not load bearing" GOOD!!!

Fine. OK. He wants to take the wall out? Go ahead. But I can't afford new cinder blocks this month.  How does he plan to stop the kids plunging to their doom off the bathroom floor and down the "deep end" of the stairwell? How long will we have no bath for, since we cant put it in if there is no wall there, or tiles for that matter... I daren't even mention new bathroom flooring......

I'm claustrophobic with the bath in the livingroom and building and plumbing supplies all over the house, the kids are sick of the noise and the clutter - all stuff they mustn't touch. We're all smelly and dirty because you can only wash so well in a hand basin. And we're skint! This has happened right in the middle of the kids birthdays and we have no money spare until July!

SHOULD HAVE "GOT A MAN IN"!