7.30am, "Can we go down stairs and watch telly?" We're fine with that now it's not too early. It's set up for kids telly, it'll only be a matter of minutes before Georgie is up and wants his feed which is our cue to get up and face the world. Lie in over. We're just glad that he hasn't been woken up by his big brothers yelling this morning ( unlike most other mornings ).

"WHO TOOK TOMS NAPPY OFF?!"

Since George is still sleeping I leave him to it and go down to help the Daddy.

There is poo EVERYWHERE! It's on the floor, on 3 of 5 sofa cushions, on Tom's stool, all over Tom himself. Hubby is already in with cleaning Tom up. I go and fetch the upholstery cleaner, the anti-bac spray, and the fabreeze! I set to work on the sofa. 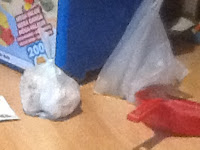 Turns out Jack was trying to pick up the slack from his lazy parents who where clearly not getting out of bed fast enough, and thought HE would change Tom's nappy. Commendable! A lovely thought to both help his brother out of an uncomfortable situation and save his parents a job ( he is a very helpful young man ). He'd even put the dirty nappy in a nappy sack.

However, Jack has never changed a nappy on his own. He helps me with the wet ones on his brothers sometimes, but Tom is potty training and generally only has a nappy over night, and George is still very obliging with his bum-changes with him only being 12m old. Tom clearly didn't want Jack to change his nappy, had broken free of his big brother, and then scrambled all over everything trying to get away. Leaving a smudgy brown trail everywhere he'd been.

So what have we learned today? A few things really: 1) Parents of young children can NEVER have an 8am lie in. 2) A poopy bum should be changed INSTANTLY even if you are more than half asleep, and 3) We need to teach our eldest when being helpful is, in fact, utterly UNHELPFUL!