On Sunday we took a trip over to Blackpool to visit Madame Tussauds.

It's the first time we'd ever taken the kids and the Hubby was a little sceptical about going thinking that the kids wouldn't really appreciate it. We're not big on Celebrity in this family and don't get hooked on the Reality TV Shows or Game Shows, and the kids are a bit too young for the Soap Operas and shows that air after the water shed...

But I felt sure they would LOVE the Family Favourites section with all the cartoon characters and Kids TV shows. They might even get a kick out of seeing THE QUEEN!

We were greeted at the doors by a helpful member of staff asking if we already had tickets, which we did, and she directed us past the crowds waiting to pay and straight in - so I recommend getting tickets before you go! She was very friendly, took our picture for us and made the children laugh. I love a warm welcome! Because we had Georgie in the pram we were offered use of the Pram-park if we wanted it, and also told how to get access to the lifts etc if we wanted to keep the pram with us (which we did).

When we got inside the kids were mesmerised by it all! At first they were a bit nervous of going up to the wax-work models but they quickly got over it when they saw so many other people standing with them, touching them, and having pictures taken with them.

It's so much better than I remember other wax-works when I was a kid, where you couldn't get NEAR them let alone cuddle one for a photo! There is a really friendly atmosphere and no one breathing over your shoulder saying "don't touch!" 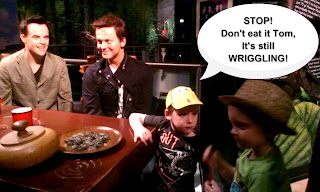 As we went round the kids kept finding little interactive bits, like a "test your reflexes" game in the sporting heroes area, and a "challenge" over by Ant & Dec's Celebrity set, and a Mirror Maze you wander round trying not to bump into yourself! The kids loved all of it and really got into the posing for photos too. Although Georgie is too young to get much out most of it (he is only 15 months old).

We got 3 photos taken there as well, which you can choose to buy or not at the end of the tour. There's no pressure to pay for anything (but we did get some photos made into fridge magnets!) I took around 100 photos and videos of my own going round too. Me & Hubby loved the best of British, with even our Jack getting excited at seeing Morecambe and Wise. Living near Morecambe he's used to only seeing Eric dancing on his own on the sea front.

But for my kids the best bit really was saved till last when we turned a corner and George spotted Bob the Builder, and then Jack & Tom saw Spider-man and Shrek!


The staff were incredibly helpful! The lift going up through the wax-works is manned and the staff were friendly and chatty, and joked with the kids. They even went in search of Tom's hat for us - which he lost half way round and we hadn't noticed till the gift shop. They found it too!

How long does it take?


We were in there for over an hour and a half, much better then the 10 minutes hubby had expected. And we had no queue time because we already had tickets!

How much is it?


We spent £18 on photos (3 fridge magnents, one of each shot we had done going round) and £3 in the gift shop. Not bad really!

The Big Question.... Would we go again?


Yes! We will be coming back! Jack & Tom said they would love to go again next year and by then I think George will be more involved too. This got a big thumbs up from us.

All views and opinions in this review are my own. I have not been paid to make this review, but I was given entry tickets for free.