July 08, 2013
Those of you lovely people who have "liked" my Facebook Page will have seen me posting about Sudocrem's Treasure Hunt. Not seen it? Well, pop on over there now (but make sure you come back to read the rest of this post, it's a good one. In fact, just open it in a new tab so you can do it later). It's a simple little game but there are good prizes to be won

I've not won anything yet but it's free to play so I'm still "digging" every chance I get.

It coincides with the launch of Sudocrem's new product, apparently the first new product in 80 years! Now, personally I had no idea that Sudocrem has been around for that long. But it is something we use a LOT of! I've had 3 babies and I am all too familiar with Nappy Rash!

Unfortunately I am also familiar with the problems of trying to carry a pot of Sudocrem around every where. We've had a few Bum-cream related disasters, like when the pot burst open in the change bag and everything got covered in barrier cream, or when the baby grabs the pot in a moments parenteral distraction and paints the whole of everything in white, or just eats it! If you've got kids already then you'll know the kinds of stories I mean.

So what's so wonderful about this new Sudocrem?

The first thing I like about it is IT COMES IN A TUBE! And not one of those fiddly tubes with the screw on caps that go skitting across the floor and under the sofa when you're trying to change a nappy in a hurry, a sensible flip-top cap. And I'll be honest, I gave the tube a GOOD squeeze to see how likely it was to burst open in an abused change-bag that gets used as a football and it didn't pop open! Big thumbs up from me!

How is it different to Sudocrem Antiseptic Healing Cream? 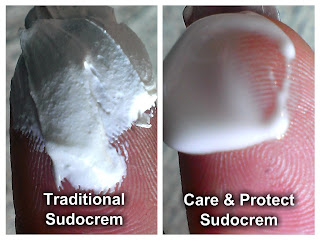 The first thing you notice is the texture.

The traditional cream is quite waxy and (I'm sure you'll agree) a bit messy to use, but this new Care & Protect is very different.

It's quite silky to the touch. I like this better. It also feels like you don't need to use as much because it spreads out on the skin very nicely.

When I've used this on my 1yo George I've only applied a fingertip full and it's covered all of his "bits" perfectly well.

This is the official blurb:

Sudocrem Care & Protect is a nappy rash ointment, designed specifically for babies and offers TRIPLE PROTECTION against the causes of nappy rash by:

1. Creating a protective barrier that seals in the skin’s natural moisture and protects even the most delicate skin against external irritants.

2. Conditioning the skin- Vitamin E and Pro Vitamin B5 helps to protect the skin and keep it soft, healthy and moisturised. Pro Vitamin B5 has been shown to act as an anti-inflammatory on skin, and acts both as a moisturiser and an aid to stimulate the skin’s natural healing processes.

3. Guarding against infection- As well as sealing in the good stuff, Sudocrem Care & Protect acts as a barrier to protect delicate skin from the bad stuff, like the chemicals in urine and poo, and from chafing and rubbing.

Right now George is teething. This is pretty much the only time we ever get nappy rash (yes I know the medical professionals say there is no link but we parents know there is and that medical science just hasn't found out what it is yet, right?) and I am using this Care & Protect on him instead of the traditional Sudocrem. So far with great success! He has no soreness at all at this point!

That sounds AWESOME! How much is it and where can I buy some?

All views and opinions in this review are my own. I have not been paid to make this review, but I have been given a tube of Sudocrem Care & Protect for free.