Georgie's Given It Up 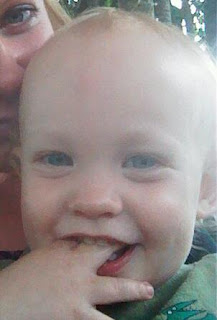 It's been almost a week now since George last had a breastfeed. He simply lost interest. He's been down to just a bedtime feed for some weeks now, and then he had a week where he didn't have a feed every night but still most nights. And then.... then he stopped.

It was his choice to make. Every bedtime I've been offering him his feed. Most nights he would nod his head when asked if he wanted his mummy milk (or simply "Boobies") and pull on my top until I gave him what he wanted, but more and more he's been shacking his head, climbing off my knee and toddling off to the stairs for bed. I can't force him to feed. I just hope he doesn't do what Tom did and change his mind in a couple of weeks when it's too late.

I know I could try to express to keep my supply up but I've struggled to express this time round (when I found it so easy with my first two) and to be frank I think at 15 months he's had a good run. Better than Tom (12 months) and a lot better than Jack (9 months). I'm pleased I've fed him for this long. I'm sad that it's come to an end. But I think it has now. I envy those mothers who successfully breastfeed to 2 years and beyond. I wish I hadn't taken Jack off the breast as early as I did - although it hasn't done him any harm - and because of that I've continued to feed his younger brothers for as long as they were interested.

I admit I feel quite sad about this milestone. He really isn't a baby any more. He's walking, saying words that even people outside of our family can understand, and now he's gone and self weaned too. My Littlest Man is getting to be a Big Boy.

Excuse me while a go and wipe a tear from my eye.
.