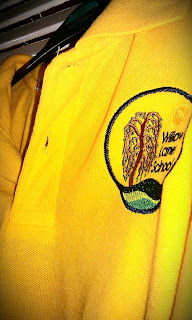 We had a great summer, but to be honest, I think it was about a week too long. The last few days before Big Lad went back to school the bickering started between him and Blondie, and Boo got his tuppence worth in too.

And then to cap it all off, Jack got ill. Right before the start of school. Not being sick or anything, but hot and tired. He wanted to go to school though and I figure that the first week back in a new class is pretty important so we let him go. There's been at least one of us home all week so if the teachers thought he was too ill to be in class we would have only been 5 mins away for picking him up. But he's muddled on and each day he's got a little better. What ever it is, it's not catching. Neither of his brothers are ill, nor are we, so I'm not about to bring the whole school down with something nasty.

His new teacher is already impressed with his reading skills, she was telling me so this morning when I dropped him off. I love hearing how smart other people thin my kids are. I can't help thinking how much more impressed she'll be when he's fit and well and showing her what he can really do! I swell with pride when the head teacher comes up to me in the play ground and takes an interest in how he's doing. She listens to him read quite often and when she does Jack comes home with a huge smile and big "well done" sticker which gets pride of place on the side of his bed.

It's kind of nice to get back in to the old routine; packed lunches, ju jitsu lessons, after school park trips, only going shopping with two boys not all three - which is chaos. And it's a lot calmer in the house through the day with only two kiddos to watch over. But I miss my big lad when he's not here.

Next week my Blondie Tom starts at "big" nursery. We have his home visit on Tuesday, and his first half day on Wednesday. What will I do then?