September 01, 2013
Awww! Hubby's little bro Bob has finally got round to tying the knot with his lovely Missus, Rachel, mother to their bonny lad Ben. It was a beautiful ceremony, and a gorgeous setting. The bride looked radiant....

And we almost missed it!

We don't know Birmingham very well. We've hardly ever been. But this is where Bob & Rach have set up home, and where they got married. We took the advise of several family members and book in at the Tavelodge just down the road from the venue for the nights either side of the wedding, since we couldn't afford to stay at the actual venue.  3 minutes down the road we were told. Well, as we arrived in Brum and came off the motorway Hubby spotted a Castle Bromwich Hotel just off to the right as we drove along, less than 10 mins from our hotel. "That must be were they're getting married!" he says, I glance over and pull a face. It's not pretty, and there's a Wacky Warehouse over the car park. I can't help thinking "they paid how much for that???" Mmmm.... I should have followed my gut!

The Travelodge was a bit grim to say the least (missing fire extinguishers, crumbling plaster, rotten windows, water stains in the bathroom walls,  unvacuumed stairs & corridors, no lift....) but the staff were nice! It's also just up the road from the Morrison's store where my Sister-in-law (not the bride) had her car broken into and her iPhone stolen in the 5 mins she was in store this weekend.

Morning of the wedding and we're already a bit flustered, the Toby Carvery next door, which advertises a tasty looking breakfast from 9am, is SHUT! I've NOT booked breakfast at the Travelodge, so we have to go in search of food elsewhere. We find a FAB cafe called Castle Diner (highly recommended!!!) and eat our fill before walking back. It's half 10 now, we have an hour to get ready and get to the wedding which happens at 12 noon. No problem, honest!

OK... it's a little after 11.30 when we all get in the car and set off. It would have been 11.30 exactly if I had not had to dive back to the room for more tights, having laddered mine getting in the car. Hubby is trying to figure out the Sat Nav on my phone, and getting stressed. I'm wondering why he's bothering since we saw the venue the day before. I set off while he figures it out, he finally does and it tells us to turn round! Back towards the Travelodge! Then takes us down a road one tuning before our hotel and into a patch of gravel between a tall, dull brick wall, and a housing estate. This CANNOT be right! There's nothing here! So we back out and head off towards the hotel Hubby had seen. Only now we can't quite remember the way.... at the last roundabout I'm looking at the Sat Nav not the road signs and I find myself not knowing which exit to take. I ask Hubby.... He says "We saw it coming off the M6? Second exit says M6", I'm not 100% but time is limited to I go for it. Oh crap..... we're ON the M6 Motorway!

So we plan to come off the next junction, turn round and retrace our steps. There is no next junction! We wound up an the M42 (I think, they all merge in to one!) and I eventually get the Sat Nav working. Another call to Sister in Law and more detailed explanation of what we'd done. Turns out that dull brick wall ... that was it! We were just ROUND THE PIGGIN BACK!!! WE WERE THERE AND WE LEFT!

Luckily for us the Registrar is also late, by half an hour. Mean time I am breaking every speed limit, promising Hubby I'll get him there to see his Little Bro say "I Do" even if me and the kids miss it. We pull up at the venue, I kick Hubby & Big Lad out of the car and send them to the wedding, while I park up and drag the other two sleeping kids from their slumber and haul them in too, fully expecting to miss it. I get into reception with toddler in hand and babe in pram, panting and stumbling in my silly new high heels. There's a guy on reception, on the phone, ignoring me. I wait a moment, cough, wait a little more. Then I just have to butt in.

"I'm looking for the Walker - Jenkins wedding?"
"thought there" points with a pen, not looking up "Through the doors and up the stairs"
"Stairs? Really?" I gesture to the pram, and children, hoping for some help, or even advice. Nothing. "Fine!"

I ditch the pram and drag the kids up three flights of stairs. Nothing but hotel rooms!!! I'm sweating, Georgie is wriggling out of my arms, and Tom is starting to whine. I rush back down, Tom trailing behind me, and back to reception where I DEMAND help. A second guy comes and shows me the way. As I get to the top of a DIFFERENT flight of stairs I pass the Bride and her Father.

And we rush into the room just as everyone is told to be Upstanding For The Bride! Whoops!

But at least we made it! All of us. They got married, had a lovely reception and evening do (with Hog roast!) and we wish them all the very best at the start of the magical journey of life together. 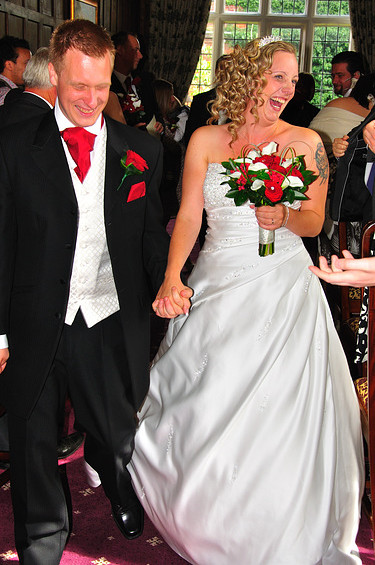