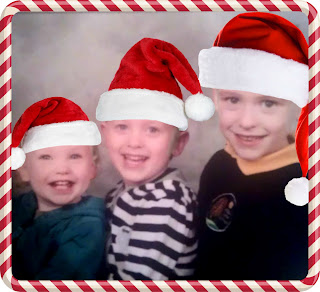 We've had a lovely time visiting family, although sickness reigns. Georgie was sick on Christmas Eve and Christmas Day. We all have coughs and look as though we haven't slept in weeks. I personally feel like death warmed up and have been letting the kids to pretty much what ever they want today just so that they'll give me some peace. Fortunately they have chosen to play on the shiny new Wii U that Santa stashed under the Christmas tree for us all so I can sit at the back of the room keeping an eye on them while they play nicely together.

There has been the odd trying moment this Christmas, like when one of the relatives came out and said "So you're having another baby then, Charlie?" ... I think I managed not to swear at him. Apparently there has been much talk over our plans for another baby and this guy jumped the gun at bit. It just wasn't something I was expecting from my husband's step-cousin's partner to come out with in front of a whole room of people!

There has been talk of babies all Christmas though, from speculation over who will be the next person to announce a pregnancy to whether some couples will be having kids at all. It's something that's never far from my mind, and not far from many others too it would seem. It would be nice to think there will be a few extra family members by next Christmas though! Nothing makes a family Christmas more special for me than lots of babies and little kids all amazed by the magic and beauty of it all.

Life is starting to get back to normal now. Hubby went back to work today. I go back on Monday when the bigger lads go back to school and nursery. And the diet is back on as of this coming Sunday. I'm going to have gained some weight but I'm not beating myself over it. Two weeks off and then back to it. That was the deal!