January 02, 2014
I've been feeling pretty poorly for the last few weeks. I'm tired and sickly and have a nasty rattling cough. So from that point of view Christmas hasn't been great. I've been rubbish at taking photos and videos and will have almost nothing to share on that front.

We did, however, have some lovely time with our families!

Christmas Eve and poor Hubby was working as usual. We'd packed the car (still have a courtesy car) the night before, and I bundled the kids off to Brewsters for lunch and a good play rather than sit at home with them getting more and more wound up by the hour. It worked out pretty well! Then we picked up the Hubby and drove over to my Mum's for Christmas Eve and Christmas Morning.

Georgie continued the tradition started last year of being sick in the middle of the night and had me and his Daddy up at 3am. Hubby took Georgie off downstairs to try an let me get some sleep since I had another long drive ahead of me. 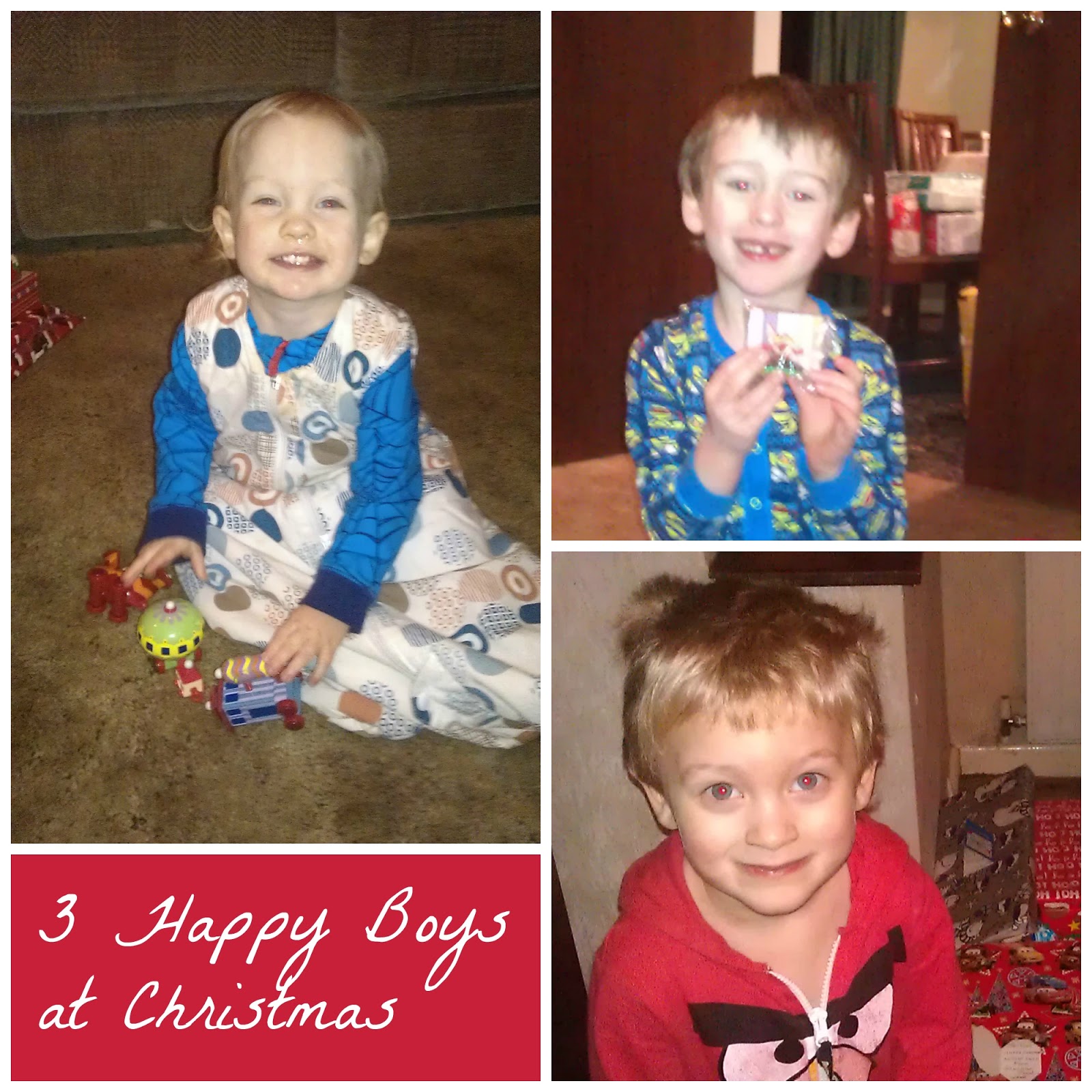 The kids were over the moon with their presents, although I think Jack forged a new world record for most presents opened in the shortest time...... They had a bit of a play with each of them before we bundled them back into the car and headed over the hills to my in-laws. We had an amazingly simple journey (there has hardly been any traffic on the roads at all this year, at least, not when we have been driving) and got to Jenny's house EARLY! For the first Christmas EVER!

Jenny and Ash put on a lovely Christmas dinner (mainly Jenny by all accounts but we'll let Ash take some credit) and we all ate our fill before the kids pounced on another pile of presents each! Later we went to visit my Father-in-law and his houseful. The kids had a great time and we had a lovely catch up with all that side of the family. It was all going so well until it was time to leave, and George redecorated the kitchen with semi digested chocolate and orange juice, just two steps from the back door and outside.

Boxing Day saw the rest of the in-laws arrive at Jenny's house: Rachel, Garry & kids, Bob, Rach & Ben, Clare & Meggie, my Mother-in-law and her partner, and friends Joy, Michelle and Michelle's kids. Packed just isn't the word! But we all managed to settle in and have fun. There became a natural segregation at some point with the majority of the women taking over the dining room, and the fellas and kids in the livingroom. I have no idea what the men folk and kids were talking about or doing, but we women wound up laughing about boobs and bras.... At one point Jenny took her bra off (under her clothes, I forget why now) just as one of the nephews (Nicky, 10yo) walked in. Jenny shook the bra out in his direction shouting "Booooobies" and I swear the lad almost died of fright on the spot! Our little coven was cackling about that for a good 5 minutes. Women are so cruel when they get together with booze and chocolate!

We had a quiet day to recover after that with a little bit of sales shopping chucked in here and there, and then we rounded things up with another evening at my Father-in-law's for his youngest's birthday - and George managed not to be sick this time - before having one more night at my Mum's and then home.

The next night was News Years Eve and the kids had got it into their heads that they were staying up till Midnight. Frankly, there was no way I was going to be awake at midnight, let alone my 5 and 3 year old kids (Georgie wasn't even given chance to think about it). But I really didn't fancy a row with the kids, or to make promises of waking them for Midnight that I might not keep. So I came up with a cunning plan and searched YouTube for New Year celebrations. And I found one! It was labelled London 2014, but was actually LAST YEARS celebration.... So around 9pm and sent the kids to get washed and ready for bed so that as soon as they had watched the New Year come in they could get right in their beds. Then I hit play. They counted down to midnight, watched fireworks, and sang Auld Lang Syne. And then they went to bed!

An hour later I did the same..... I was woken at midnight-ish by my phone going crazy with texts and facebook notifications, snogged the Hubby, and went back to sleep!

I am a true rebel! I wont follow the herd at stay up half the night like the world expects me to! I will SLEEP my way into 2014!