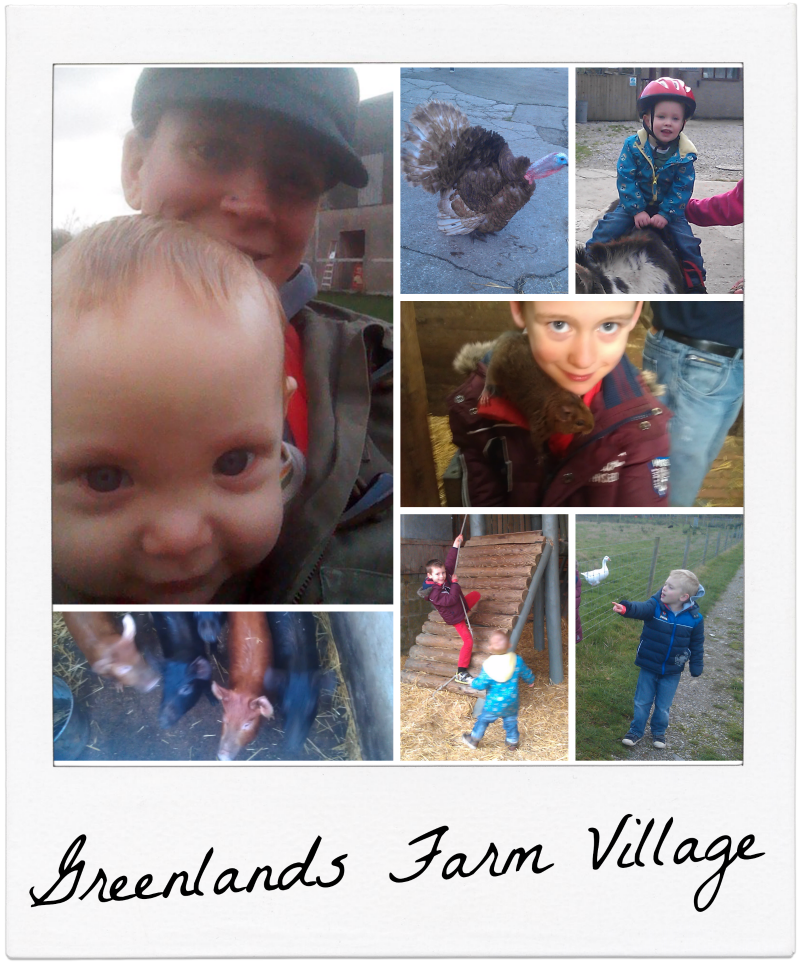 This is the first time we've been to Greenlands Farm Village, even though it's only up the road from us at Carnforth, a little over 20 minutes from our house in Lancaster! It's going on our regular outings list though, because the kids had a great time.

We arrived in the afternoon and the place was busy but not over crowded so it was great for me because it meant I wasn't likely to lose track of the kids (Hubby is poorly at home). There are signs up around the place with activities and times on. The boys were desperate to get a donkey ride since it's one of the few things missed off our Summer Bucket List this year so I made a note of the time and we went to check out some animals!

The first thing the boys wanted to do was pet the small animals, so we found the rabbits & guinea pigs and gave them a fuss. There was also a very friendly and very fluffy chicken... I have no idea what breed it was but it looked like it had stuck its claws in the plug socket and been zapped, only not scruffy and very very soft. All the pets which were out were clearly very used to children of all ages because they weren't even nervous of Georgie. He is very gentle with animals, but they would know that just to look at him.

There are plenty of animals wandering free, sheep, goats, a fabulous gobbling turkey, all of them friendly (unless you're Tom and try to bully huge turkeys in which case you deserve to get gobbled at) and used to getting a pat or a scratch behind the ears. There are also stables and pens where you can see animals, we found 3 litters of adorable piglets at 3 different ages. All of them cute and cheeky! There's also a walk through the fields where you can see more varieties of sheep and goats, donkeys, ponies, chickens, geese, ducks, bulls & cows, and a couple of animals that my uneducated eye couldn't decide were lamas or alpacas (or even one of each, no idea!)

By the time we had been round and seen them all we had just enough time to see the sheep dog puppies and let Jack handle a rat (which did a wee and a couple of poops on his coat, haha) before the donkey rides. They were well kitted out for the rides with helmets for all ages and sizes. Even Georgie managed to get a ride - his first ever - and what's more his donkey was called George too! Jack & Tom have both ridden donkeys and ponies before but they can never get enough. I think Jack was a little disappointed that he didn't get to ride the massive and very hansom shire horse whose nose we had been rubbing while waiting for a turn on the donkeys.

Next the boys wanted to run off a little energy after being calm (mostly) and gentle round the animals. They had a mad half hour in the hay barn play area, climbing, sliding, and riding round on little toy tractors. I took the opportunity to sit comfy at a picnic bench and feed Freddie. I wished I had come earlier and brought a picnic (next time for sure). The we went on the hunt for more animals to play with! They adored the pigglets so we had another look at them and then made our way back to the petting zoo area for the Halloween event they still had running. The boys had a go at bobbing for apples - Jack managed to get one! - and a good root round in the lucky dip. They could have stuck around for a spooky story too but the animal feed we had bought was burning a hole in their pockets and they just HAD to go and find some animals to feed!

Bruce the sheep seemed to get the lions share. He seems like a bit of a character, never far from people and constantly nosing in pockets, bags, and baskets under prams looking for tasty treats. All my big lads got to feed him and I think Georgie would have liked to have brought him home!

Eventually I managed to prize my kids away from the animals with a promise of a fruitshoot and play in the indoor Play Barn before home, while I had a well deserved and warming coffee, and fed Freddie again. The soft play area is massive! When the kids saw it I swear their jaws dropped and they couldn't wait to get on and play.

It was a brilliant afternoon. We stayed until kicking out time and didn't get to see and do everything available. Next time - and there will be a next time - we'll get there earlier, bring a picnic, and make sure we get to take part in the lamb feeding, donkey grooming, and other activities. I might have to bring another adult too... just so I can have a good look round the shops I had only been able to glance in the windows of!


This isn't a paid or compensated review.