Why my kids go to bed "early" 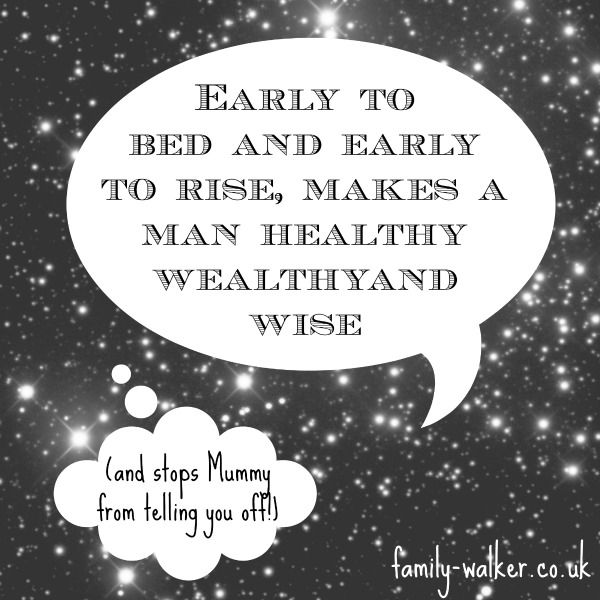 Jack's always been a good kid. The Hubby and I are exceptionally proud of him. He does very well in school and - even though he drives us crackers at home much of the time - his teachers have always loved him. He got on especially well with the former headmistress.

So you can imagine my dismay just before October Half Term when the acting head, who is normally the deputy and has known Jack since he started, called me aside to discuss his poor behaviour in school. That particular day it had been raining hard so the kids hadn't been let out to play, they had a movie to watch in the Hall instead. Jack and a bunch of other kids had been chucking stuff at the screen. Jack got caught. A single act of boredom? Apparently not.  She has had to speak to Jack "on a number of occasions" in the last couple of weeks about his attitude and behaviour. She put it down to him being over tired.

Now... as it happens Hubby and I had been having words with Jack too, and we've come to the same conclusion. He is over tired.

At the end of the Summer Term Jack had been canvassing us to let him stay up later. The old "but all my friends do" line was chanted out a dozen times a day or more. So we thought we'd give it a go. The deal was: He can stay up till 8-8:30 during the holidays and we would see how it went. If he ok we'd carry on. If he wasn't then he'd go back to 7-7:30 like his younger brothers.

Through the Holidays is was ok. But not since he's been back at school! It's been like living with a moody teenager. The night before this conversation at school we had told Jack that we'd had enough and some changes were going to be made.

He started going to bed at his old bed time of 7-7:30 and has been a much better boy, although it took a few days. Problem solved!

I'm not saying all kids should go to bed early. But this worked for Jack. If he stayed in bed longer in the mornings (all the lads are up between 6 and 6:30 regardless of what time they go to bed) then I would let him stay up later. But he is a boy who NEEDS his sleep.

I saw the Acting Head this morning in passing and paused to ask if there had been any more bother with Jack. She assured me that there hadn't. Earlier this week I had a call from school to ask permission for Jack to join a group of children working on improving their confidence. I asked if they thought he needed his confidence improving, and the lady on the phone laughed "No..." she said "we want to use him as a role model!"

It's Parents Evening on Monday too, so I'm hoping to get a full picture then.