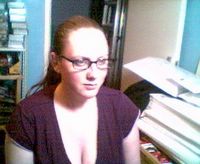 It's been a funny few days. I've been sick with a NASTY cold, which I think is going to settle on my chest again, which means I'll end up back on that bloody inhaler again! Not good.

Being full of a cold also means that I haven't been to the gym all week, so I'm feeling flabby and fed up with myself. But I'll get back in there tomorrow - sniffles or not!

I also have to go gift shopping for Mum. He's 61 on Sunday, and damned if I can think of a single thing to buy her! I love her dearly, but NEVER has a woman been SO difficult to buy for!

Last time I tried to ask her what she would like, she told me not to spend money on her. Yeah, right, she's my MUM! As if I can't get her something!

So I thought I get her a couple of sweet nick-nacks and a very expensive, posh bunch of flowers from Marks & Sparks - I mean, REALLY POSH, the best I could afford. Until I got a phone call from her at work this morning thanking me for the Gliding Lesson I bought her.

What Gliding Lesson? It took a good five mins to convince her that this gift really really wasn't from me. I can't imagin her wanting a gliding lesson (I love her, but she's deadly enough behind the wheel of a car, know what I mean?). I had considered getting her a day in a hot air balloon in the past, but I could only book for one, and I'm sure she's rather do that with John (my step dad) so I never have.

Now I feel awful. A bunch of flowers is NOTHING compared to a gift like that. Really dull...... Some daughter, eh? So, I guess after I've been to the gym I'll be off into town to try and find something a bit more interesting.

Like a day at a spa or something? Not that she doesn't treat her self to some fantastic pampering on a regular basis already, because she does. Guess that'd be nothing special.

How about a delux make over and photo shoot? Nah, she hates having her picture taken, and she'd only have to pay for the pictures she wanted to keep anyway.

Work's taken an interesting turn too. The wanker known as Roy looks like he might be out of a job soon. He's caused no end of chaos since he's been at our branch, starting fights between Lynn and Andrea, trying to get me sacked, and driving Darren to almost killing him, not to mention never doing any work and dragging poor Steven down with him. But now he's caused problems for the company it self - by knowingly buying in stolen goods! Now the boss HAS to do something! HAHAHAHA!

DON'T LET THE DOOR HIT YOU ON THE ASS WHEN YOU LEAVE - FATTY PERVY CREEP BOY!

Having said that - he isn't gone yet!

Glenn say's he's closing Lancaster stall down again. He'll change his mind tomorrow, but he'll change it back again on Monday, and so on, lol!

Andrea is determined to take up some of the slack in the shop if Roy does go, which will be great, and solve so many of her problems. I am a little worried about the whole "Lynn thing" though, so I guess we'll just have to see how that one pans out.

BH (my little enterprise ^_^) seems to have picked up again today - HooRay! Just when I think I've hit a slump, people log on a buy stuff! Hopefully I'll have a nice run over the weekend. I've even sold my first lot of StarShip Troopers Minis! AND someone logged onto the site and bought some Duel Masters decks. I thought they'd NEVER shift!

My poor Yorkie's tired out though. Picked him up from work today and he was cold and soggy. Typical, on his days off the weather's been so nice. He goes back to work and it pisses it down! Most of us would think that was good, right? NOT when you work in a garden centre, hee hee hee! Poor bloke! I cooked him a curry for tea though, so that warmed him up a bit. Bless!

I'll have to start looking for somewhere to book for our anniversary soon! It's only a few weeks away and I haven't even found somewhere to go yet! I can't get him to book time off work so we can go away - and NOT go away! I'll never hear the end of it!