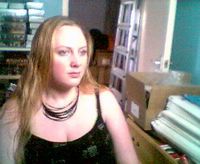 Went to the gym after work, and had a lovely long shower after. I'm still all damp of hair and it feels lovely and cool down my back. *sigh*

It's offical - Roy is GONE! Sacked for "gross misconduct" - which mean he gets no notice and no money, hee hee! Let this be a warning for all the tossers out there who think it's a good idea to twat about, not do any work, aileanate staff and - oh yeah - BUY IN STOLEN GOODS!

I've had a pretty good day in general - slightly peeved about my Account Manager for GWS - he also covers MM's account, and I spoke to him today of behalf of MM. And he was EVER so sweet and helpful. Not a sniff of the twatish attitude he has towards me when I'm calling for BH! There was an interesting moment when he asked me again what my name was. Naturally, I told him. The hessitiation in his responce was great! He knows that voice, he knows that name, but not connected with THAT company.... Surely not?? Lol

Oh, speaking of which - I'm SO pissed off with GWS. The order I sat in waiting for all day Tuesday didn't arrive! Even though I explained clearly (and got confirmation / agreement) that I needed to have the prder on Tuesday becasue I wasn't available to sign for it any other day.... was set to arrive on WEDNESDAY! And it took forever to find that out. I had to call GWS to ask who the curier was. I got my "account manager" who was short and sharp with me again. He told me the name of the company and I went about trying to find a number to call. When I did I got the wrong area. Eventually got the right number, and the very helpful punter on the phone asked "Are you such and such?", Nope. "Oh, well that's the only GWS order we have going to Lancaster today" DOH!!!!! Yorkie's already off to the pub by this time, meeting Mark and Gemma. I'm supposed to be there too. I'm not happy. So I call GWS again. This time I get some one different. A Nice Man. A Very Nice Man. We shall call him T. He's area manager for the other end of the country, but he went out of his way to help. About an hour later he finally managed to find an answer for me. Wednesday. He understood why I was pissed off, and has arranged for my stuff to come tomorrow. When I am in. He seemed amoused that my Account Manager had wound me up - I think it happens a lot. Grr

It's not been my week for stock though - One thing I did get on Tuesday was an order from HG. Not that I had placed one.... They have charged for and sent my last order TWICE. So I now have double what I want - and less cash in the business account. Not overly chuffed about this. Sadly my Account Manager for them is away on holiday. He's a very nice man too, but I think his being away if what has casued the problem. I have contacted them ad told them - and then contacted them again to say IO would like to keep SOME of it - as I have sold some and will only have to order it anyway. Not had a responce yet - not like them at all. I'll be glad when my "mates" back at work. He'll sort it for me.

Between rants about suppliers, I have been sunning myself. Foolish really - I don't do the sun very well. Don't get me wrong, I love the sun. I need it or I get depressed. My skin on the otherhand.... After just 1 hour in the garden reading I am bright pink across my chest and shoulders Wahhh!

I did fianlly make it to the pub after I had sorted out the GWS problem. I almost wish I hadn't. Gemma drives me nuts! We made the mistake of signing up to the pub quiz. Normal stuff - we get given a sheet of random words to match up with statements, and the usual questions-over-the-mic. We did terribly! Well, we don't watch soap opera's, big brother, pop idol or any of that other shite, we don't like sport.... doomed from the start really, but that was all a laugh. the PROBLEM was the word sheet. All the words started with SEX, and three of agreed on one of the answers, and Gemma went off like a bomb. "THAT'S WRONG! IT'S THIS WORD! IT'S SPELT WRONG, BUT I KNOW IT'S THIS WORD!" She got really mad when Yorkie rubbed out half of her answers - she snatched it back and put her answers back in again, screaming like a banshee. Yorkie changed them again, and she sulked for the whole of the next round. I tried SO hard not to laugh when she was prooved wrong. The girl has to understand that she it not the only person in the wold with a brain and education. All four of us are smart, Granted only she and I have degrees, but I don't for a second think I'm any smarter or knowlegable than Mark and Yorkie - in fact I know in a lot of cases that I'm not. I don't get stroppy when they talk to me about things that I already know like she does, and I don't get threatened when they talk about things I know nothing about. I know I'm a couple of years older tha she is, but GOD! She NEEDS to grow up!

Needless to say we didn't win - I think we came fourth out of 7, which all things considered was ok! Me and Yorkie left a little after and coppered up our last pennies before payday for a Pizza and staggered home (where did finally say to me that he would make me a wife one day - and before I make him a dad! YAY!)