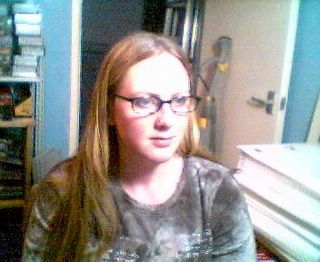 This is me today - feeling reasonable happy.

Took Yorkie to work first thing, and then went to the gym via Asda. Bought some sexy new undies, some breakfast, new tracksuit and a magazine. Paul - the guy who inducted me to the gym - had me in stitches before I had even managed to get changed today. I swear the guy is off his rocker!!!

Strange-latino bloke was there again giving me funny looks. OK, so I'm not as physically fit as the other girls who go, but even blobs have to start somewhere, at least I'm making an effort.

It wasn't much of an effort today though I have to say. Let's face it, I've not had much sleep this week.

Tuesday night - we had a row. I can never sleep when we fight
Wednesday - Nip/Tuck started, and didn't finish till late but I stayed up for it anyway
Thursday - Went on Yorkies staff night out, got home at sometime near 3 am
Friday -Had a take-away and movie night. Up till late again

It's hard to work out when you've had no sleep. My body was screaming at me to give it a rest, so I just did the weight machines once (should be twice), did 10 mins each on the tredmil and X ramp, missed out the ab-curles altogether and sacked it off.

I've had a pretty chilled out afternoon too. Not done much . I worked out the charges for designed a web site for one of Ali's mates and emailed that off. I doubt I'll ever hear anything back, but you never know your luck. If they go for it, well, it's money for next to nothing!

I was highly impressed when the car actually started for me to pick my beloved up from work. Simon and Debbie both came over to the car for a quick chat after Thu night's jovilities. We've been on the PC's most of the night, with a short break for some food (late night's left overs, yum yum) and Doctor Who, and now we're back on until Shaun of the Dead comes on.

Thank GOD he's off work tomorrow. It means I can have a nice lie in. I'll only have to move to go for a pee, and to pick up the remote so I can watch Hollyoaks. Lazy sundays are just great!

We should be going to the Circus tomorrow. It's the last day that the Chinese State Circus is in town, and I've got some half price tickets!!