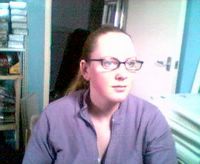 I'm a bit miffed with myself today for not going to the gym. But I'm still stuffed up and coughing and headachy, so I guess I'm not really up to it right now.

I'll be going tomorrow though - there is no doubt about that. I want to have a sauna and a pamper tomorrow too, and it seems daft to go to the centre and do one, but not the other. I'll give myhear a nice deep condition and get the straighteners on it, so I don't feel driven mad by it and tie it up (like I have done the last two days - grrrrr hair)

Took myself to MM this morning after dropping Yorkie at work. I needed to drop off the stock from Lancaster anyway. This meant facing Lynn and Roy.... DOOM FILLED ME! Although Lynn was nice as pie to me again. As I was dropping stuff off in the office she came up and said she was having a cig if I had time for a natter. Curiosity got the best of me - as it tends to - and I joined her.

She had a mad rant about Roy being a tosser (granted), complained that Daz never calls in to see her anymore - she says it's to avoid Roy (plausable), and gripped about Glenn (meh...)

I had to get in that Roy wasn't talking to me, or Andrea for that matter. Not even to day hello of a morning. She was "horrified" and ranted on again about what a tosser he was, and why can't he just get over it. After all, she says "I don't hold a grudge. I say what I have to say and that's it" Hummmmm, really? We'll see about that when Andrea comes to asking about hours in the shop if / when Roy goes.

Typically, when I left, he actually said good bye when I did. Doh!

After that I went to Preston to try and get an idea for Mum's birthday. I was there for two hours and nothing was ringing right. Then I called in Smiths - the glider lesson was from there, maybe something more suitable was there too. And sure enough - I struck GOLD!

I have bought her a £50.00 Theatre Experience, which is basically £50.00 in vouchers for a range of theatre tickets and similar stuff. It's pushing at London, but does say that there are other venues across the country. If she can find something she likes in Manchester or Liverpool, she'll be sorted. And I can't imagin that there wont be SOMETHING she and John wouldn't want to see.

Sorted. I'll still give her the gifts I have, and some flowers, and that should be nice for her. Phew!

It looks like I'll be going on Sunday to see her - which is herbirthday so that'll be nice. I was supposed to be going on Saturday, but John wanted to see me, and Julie's in the UK with her kids, and they wanted to see me too. It's a shame that Yorkie can't come - the down side to the job he loves - the kids love climbing all over him, hee hee.

I'll also be seeing kathleen while I'm there. The photos she and her husband took last year (the first time they've seen me since I was 7) didn't come out, and they really want some more - hence the pamper day.

I tried to find a sweet femenin outfit to wear while I was shopping in Preston, but either I'm too picky or fashion right now does not suit me, because I couldn't find a thing I wanted.

I see myself in a light, floaty green and soft pink strappy top, which I can team with either sexy low slung jeans, or a soft, light skirt. I found NOTHING that wasn't either brown (I have so much chocolate cloth already) or covered in luminous pink paisley (I'll just about put up with soft pink, but not Barbie Pink).

I'll have another quick look round after I've been to the centre tomorrow, just incase something else jumps out at me.

December 04, 2014
I need a bit of comfort food at this time of year. I really love this recipe from The Hairy Bikers:  Liver and bacon with onions and gravy  and freely admit that I have whipped this from the BBC Food website. I follow the recipe (but sometimes chuck some mushrooms in too) and split it four ways at 11 pro points per serving. It's a classic, and even my 6 year old likes liver cooked like this - the 4 & 2 year olds need a little extra ketchup to convince them. The Hairy Bikers’ traditional liver and bacon makes a simple supper packed full of flavour and bursting with vitamins and minerals Ingredients 450g/1lb lambs’  liver , sliced and fully thawed if frozen 25g/1oz  butter 2 tbsp  sunflower oil 4 tbsp  plain flour 1  onion , halved lengthways and sliced 125g/4½oz rindless streaky  bacon  rashers, each cut into 4–5 pieces 1  beef stock  cube 500ml/18fl oz  jus t-boiled water 1–2 tsp tomato  ketchup salt and freshly ground  black pepper Preparation method Rinse the liver in a cola
Post a comment
Read more