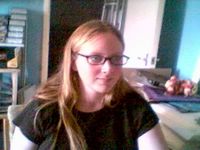 What a funny old time!

It's been a week now and I'm still floating on air! What a perfect little holiday - God, I wish we'd been there for longer.

When we arrived at Anglesea, it was just spotting with rain. I was gutted, it's hardly ever rained when I've been there, and I didn't want our trip away to be a wash out. I need not have worried! By the time we'd found the B&B the sun had come out and it was getting lovely and warm. We were to early to check in so we drove to one of my fave beaches. The tide was just going out, and it was still a bit cool on the coast, so we ate a picnic lunch in the car, then went for a walk on the beach. We held hands, collected shells and enjoyed the new sunshine (and had a pee in the dunes >_<).

When we booked into the B&B it couldn't have been any more perfect! It's a bit of the island I've never really been to before - but we ARE going back! The village was tiny and perfect! Our room was no 4 (my lucky number), there was a small bar in the lounge, and the dinning room looked out over the huge garden, and down to the sea with an ideal view across the small bay. The guy who greated us gave us a quike tour, make us a pot of tea and left us sat in the garden, enjoying the sun in the now cloudless sky, and watching the birds in the avairy. We had our own bath room, so after a lovely walk along the coast to watch the fishermen and enjoy the view, we washed up and went out for dinner.

The local posh eatery was booked up, so we hopped into the car and drove across the island to Holyhead and had dinner in a Chinese - we had the place to ourselves and got great service from the slightly insane staff (who had all but dagged us in from the street to start with - Wednesday is clearly a quite night in Holyhead).

After dinner we drove back to the beach. the tide was just on the turn again and the sun had just set. Stood on the beach, me in my new purple silk dress, Yorkie in his best suit, he wrapped me in his arms to protect me from the chill sea breeze, produced the ring from his pocked and said "Would you do me the honour of being the future Mrs Walker". My reply? "I'd love to". He slipped the ring onto my finger. We kissed for the longest time, and went back to the B&B, were we curled up in the bed and did waht people-who-are-getting-married do.

In the morning (after the expected morning, ahem, well, you know) we had a MASSIVE breakfast with everything you could imagin thrown in! It was another beautiful day, so we desided that going to the Sea Zoo - which is mostly indoors - would be a waste of the sunshine, and went to Beaumaris Castle insted. We had a great wonder round, scrambling up ruins and creeping up stone staircases (those sprial stairs scare the SHIT out of me, but Yorkie kept me safe). After that we went to the Priory down the raod, and walked from there to the beach where you can see puffin island. We had another beach walk (saw a dead dogfish) and collected some more shells and pretty pebbles and staggered back to the car, worn out and sunburned.

Sadly we had to drive back then. Even Yorkie said he wished we were staying a few more nights. There's so much we didn't have time to see and do! We've promised eachother we'll go back next year - and I'll remember the camera next time! Doh!

But, Thursday was also the day on the London Suiside Bombings - we found out on the radio while having our lunch. A far cry from hearing the day before that Londing had got the 2012 Olympics. My heart goes out to all those involded!

Came back home to realtiy with a bump though. Mum didn't seem to care less that I was engaged. I could almost hear her think "oh, God, Not again!" I know she's harrased at the moment, but I thought she's be happy for us. I haven't been able to get back in touch with her since either. I'll keep you posted on that one. Dad seemed happy though, and Yorkie's told him mum, sisters and step dad and they all sent congrats. We've not told our mates yet though. I'm putting that down to Yorkie trying to put off the inevitable ribbing we're both going to get, lol! I'm hoping we'll get out this weekend and tell people.

I'm still feeling hassled about work though. The funny thing that happened, is that Roy, after jumping right into another job as superviser at a local Co-Op, only lasted 3 days! Hee hee hee! The less funny side, is that it looks like my job will not exist for much longer. I have over £700.00 worth of MM stock which needs shipping LAST WEEK and Glenn has't bothered to get any of it, and is clearly avoiding me and Andrea. BH isn't really making enough to give the wage I want, so I really need to keep MM going, or else it looks like I'll be hunting for a saturday job to top up my wages. No big deal really, it's just going to gouge a bit chunk of my pride away. I am entitled to Working Tax Credits though - or I would be if I wasn't working for MM, so that'll help.

I've also had a very sad email from the Ex today. He's split with his feller! His choice, he says. He just "wasn't in love anymore". I'm proud of the strength he had to finish it when he knew it wasn't right anymore, but sad that it should end. Especially as it was that relationship which finally ended ours. I had hopped that he had found his one true love, as I have now. Well, good luck to him in his future anyway. He also told me his sister had just split with her feller. Right after she gave birth to their 3rd child together. He moved in with his new lover! Well, he was a cunt anyway. We all knew it. Before I was with Shaun, and before Shaun's sister met this guy, he'd asked me out, and wouldn't take no for an answer for over a month before he finally gave up. He also has a kid by an old friend-of-a-friend of mine and Shauns. I guess this was inevitable, but totally uncalled for. I feel sorry for Donna (the sister). Good luck to her and her kids too.

Well, that's it then. I'd better go and pick up my intended!

See you all soon!