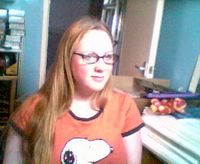 Ohhh! My God! I'm SO excited! Can you imagin what I'll be like when we get MARRIED!? I know that's still years down the line, but I'm just so full of it already, and I don't even have the ring yet.

I went out last night with Fran, her sis Alice and Alice's hubby Clark. We went to see the Bon Jovi Tribute band at the Dome, and all I wanted to do was tell them we're getting engaged! But I know I can't, I know that the ring I want might not be available and that we said we wouldn't tell anyone until we have it, but still........

The band was DIRE! We saw them last year and they were really good, but they have a new lead singer, and he's SHITE! He doesn't look the part, he can't act the part, and we felt a little partonised by him to be honest. The Dome wasn't the best venu for it anyway. It's too big for the number of people who would go, and they left all the seating in, so there was hardly any room to dance. Last year they were at the Platform, which is smaller, has a bar you can actually get to and still hear them, and room to sit AND dance. I have to feel sorry for them though, I mean, they didn't carry it off very well, and the punters just didn't get into it. They dragged out the end of the songs too long, showing off the skills of the people who actually can perform a little too much, they had gaps between the songs that were too long, and the lead singer kept screaming out "are you with me?!" when we clearly were not.

Still, it was a good laugh. Shame it was AT them though. I can't see them coming back in a hurry, and I doubt we'll bother to go next time if they do. Unless they get another new lead singer.

We're out with Mark and Gemma tonight. They did invite us round for a curry last night, but I was going out already, and Yorkie didn't feel up to it. I think he's feeling the pressure at work a bit more at the moment, what with the woman he's supposed to be assisting quiting the job, and one of the casual staff being let off there's too much work to go round. I think he'll really be greatful of a break this week.

I finally got round to buying a new radio for the car yesterday too - £160.00!!! Money I really can't afford to spend, but it'll be nice to have some CDs to listen to on the long drive to Anglesea, and it is almost my birthday. Mum and Dad are giving me cash, so I can put that on the card that bought the radio. End of problem!

Well, I'm off now. Going to chill out for a bit. I'm really stiff after yesterdays gym session. I went all out, using heavier weights, more reps and all the cardio machines - including the rower (ACK) I even did 45 ab curles, a new record for me! Now I have a sore tummy and stiff shoulders!!! Wahhhh.... But it's worth it. I love my feller and he deserves to have some one who is as nice on the outside as they are on the inside (he seems to think I'm pretty damn nice already, but there's no harm in looking the part, right?)