The hang over is finally gone! 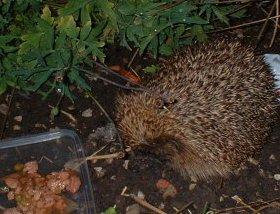 Yorkie failed to go to work! Normally I'd kick off about that - I'm very worried about him losing his job if he doesn't turn up like that, espcially when they know he was drinking the night before, BUT it seems that EVERYONE who works there takes the piss a bit when it comes to "sick" days, so I hope he wont get into too much trouble. It will be very unfair if he does!

I couldn't get my head round anything though - we slept through most of the day. I couldn't even sort my self out long enough to be any good on the computer! (wedding blog #2 was a cheat - I wrote it today and back-dated it so it would fit in, lol).

We didn't get dressed until almost 9pm - and only then becasue we HAD to take some DVDs back to BlockBuster before 10pm. But I'm glad we did, because if we hadn't, we would never have seen this little chap here! On our way back into the house Yorkie called over to me: "We've got a hedgehog!" I went back out, and sure enough, there he was! Now, I really like hedgehogs - I know they are full of fleas and so on, but they are great to have in your garden because they eat slugs and stuff! So I opened a pouch of Muppets cat food and gave him some (you can't give them milk, it makes them ill, but cat or dog food is ok). I even got to stroke his head a little bit without him curling up into a ball! Brave little chap that he is. I had to get a photo - funny how THIS one came out alright. It's just PEOPLE I can't get good shot of it seems. He was gone this morning, but with a bot of luck he'll come back.

But that's it now. That's the fun all over. I have to get back to work today and make some money. I hardly listed anything over the last few days so next week I won't be making much money. I've been slack! But it's been a busy time!!!