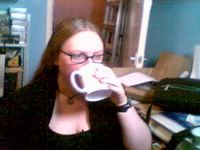 Ohhh, god! I really don't want be at MM today. I feel like shit and I'm sure it's only because I'm going in. I had the strangest set of dreams last night too, including attending an art / geography class in the MM top office, and finding out all the people I could never relate to at UCSM where in that class (which I think comes from my fear about being "alone" at MM once Andrea goes). There were also bits of dreams that I remember, like shopping in charity shops, bumping into a girl from UCSM that used to be a friends - not a close friend - and both of us bragging about our relationships, and other random odd stuff like that.

And I don't feel like I've had any sleep!

Driving to work this morning i had one of my chillout CDs on, and by the time I'd parked up I was feeling suisidal!

It doesn't help that I know I'll be without Yorkie this weekend. I want him to have a good time and everything, but I'm going to miss him bady, and I hate being on my own. Not that I won't have things to do or people to spend time with, I just hate being away from him. We had a spat yesterday too. Started out about the state of the house, but it was really down to Yorkie feeling the pressure of us not having much money at the moment, and feeling let down by his boss at work who looks like he'll not be giving him the promotion he was hoping for. Some one with more experience might be coming in to take the job instead. Why can't he just tell me things are bothering him instead of picking fights about random pointless shit?? Men! And they say it's women who never say what they mean! At least we had some amazing "make-up-Sex" afterwards.

I have a headache starting, so I'm going to go and have another coffee and find some work to do. At least I'm only here till 3pm today.