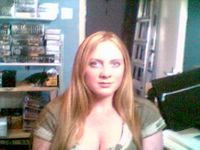 What a nice day I've had! I found an email in one of my old account from my college mate Angelina, my Nan called for a nice long chat, and my GWS order finally turned up!

It's gonna be REALLY confusing in my inbox soon though! I now have two old friends emailling my again called Angie W: Angela Wainman, and Angelina Wilson! I love talking to them again though. I've known Angela almost all my life, and me and Angelina got on so well when we were taking our mulitmedia class. It's good to chat to people again.

It was great hearing from Nan too. I really should call her more often. It was her birthday on the 10th. She loved the flowers and chocs I sent her. I'm gutted that Dad seems to have forgotten to send her anything again. So typical that he's so wrapped up in his whole France thing that he forgot his mum. Having said that - in the past he aranged for something to be sent, and it went missing. I slated him for forgetting, and he hadn't, so I guess I'll give him the benifit of the doubt until I speak to him next.

I went to MM again this AM to send off the last couple of things that came in, and to set up Glenns auction snipe gubbins. I sent myself an email with all the price lists on so I could up date the site a but this afternoon - and guess what. That damned LOTUS package wont let me open the files in my excel! SO ANNOYING! I'm sure there's a way of doing it though. I'll have another bash tomorrow.

Do you like my hair by the way? I finally got off my bum and dyed it again, and did my highlights. It seems very yellow to me at the moment, but it always calms down after a couple of days, so I'll propaby like it more a bit later. I went easy on the highlights this time, so it's not a bright as it was last time, but they stand out more because there's less of them. The light in here makes it really shine too - it's not as yellow at it look on the photo, I promise you!