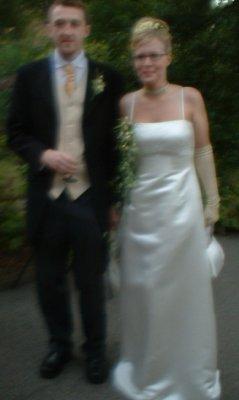 My camera skills.... not good anymore! I am SO gutted that this photo has come out blurred! However, I am asking if I can pay for a copy of some of the very very nice photos that Gary took instead.

But anyway - here they are! The happy couple, Mr & Mrs Ray and Sarah Houton!

It's such a shame that the wedding cerimony - which was planned so beautifully - didn't have a few more Catholics involed... You see, they had a Chatholic wedding at our local Cathedrol. And no one knew the words to any of the hymns, no one knew the correct responses to the Fathers speeches.... BUT the brass band who played the music for the hymns were wonderfull and very nice to listen to.... and we did TRY to sing the right words in the right places to the right tune.... The father was getting VERY pissed off with us all, saying before the last hymn "and if we could ALL SING hymn number....." blah blah blah... Sorry guys, but so few of us have any real religion that we really did come unstuck!

Word has got out about my enagement to Yorkie too, so after the cermony as we were all sipping down champers and so on, we got congrats too, as did Gary and Jill who are now expecting their first child! They asked Yorkie to God Father too! YAY!

After the wedding we skipped across the road to the Catholic Social and had a HUGE buffee (spelling!!) and speeches. Sarah's dad made a lovely speech which seemed to almost bring Sarah to tears (Sweet!), then we all tooked into the gub and booze and have a merry time of it, before taking off to get changed for the night do (when I posted that last message).

The night do was brilliant too! They had a live band that were brilliant, and even had some of us up infront perfoprming some songs and stuff. They even had Simon do an Elvis stint - with the bands front man doing the "arms" for him (see flickr). AND THEN THERE WAS MORE FOOD!

As usual Gemma casued a fuss though - Mark made the fatal error of sitting in the only available seat on the table - which was next to mine - and tried to have a conversation with me. Gemma flipped out becasue he wasn't sat next to her talking to her. He wasn't allowed to move from her side all night (just like Fran and Simons wedding last year. I invited Mark down to see Angie when she comes over before going to Uni, and he said he darn't because of Gemma. I said she was invited too, and his responce was "have you got a death wish?". Not good!)

All in all it was a brilliant do!

BIG CONGRATS TO YOU BOTH!