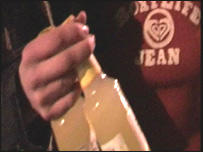 Right, there's been a lot of stuff in the news over the last few months about 24 hour drinking in pubs.... and frankly, I'm sick of it!!

Drinking laws 'will harm teens' - Only if parents don't keep control of their kids, and / or fail to educate them on alcohol!

Extended Hours Will Increase Violence - No... I don't think so! Binge drinking and packed crowds at kicking out time causes voilent out bursts, cramming as many points (or bottles) down your neck as you can during open hours, and then being pushed out into the street with 100s of other people you would normally avoid.

It will lead to more drink related health problems - Alcoholism is a sickness that is NOT restriced to pub opening hours. If you are an addict, you are addicted 24/7. Does no one think that people who have a drink problem don't have drink at home - with 24/7 access???

AND since the subject of teenagers and alcohol is around, I was a teenage drinker. At 14 I went to pubs and clubs and I drank. I am not a drug addict, I am not an alcholic, I do not have liver damage, I was never a teen-single-mum, I didn't go round beating people up or wrecking the town centre. Why? BECAUSE ALCOHOL WAS NOT A BAD THING THAT I WAS TO BE KEPT AWAY FROM! So I had nothing to "prove" by drinking, I was just out having a drink.

My parents tought me to respect alcohol. I knew the dangers, and I was ok. I'm not saying that I never got drunk, of couse I did (and still do from time to time), but I was sensible enough to keep out of harms way when I was drinking. And smart enough not to start trashing people or property.

Lets face it, if we - as a society - didn't hype it up so much, and put so many resrictions on it, it wouldn't be glorified by teens who want to look grown up. The same applies to smoking and countless other hang ups: "Smoking weed is bad", when's the last time you saw a story in the paper about some one being glassed by a pot head? "You can't put condom vending machines in schools" but school kids Are ARE having sex, give them protection from desease and pregnancy! A few rubbers cost a lot less than the millions that go into health & child care!

We all seem to have forgotten that only a few generations ago, "kids" left school at 14 and were expected to work as adults, we are repoductive from our early teens, physically we are adults at a much younger age than people like to admit. Treating young people they way we do is just encouraging disruptive behavior,

And we try to blame the results on booze, drugs, sex, schools, the police, the govenment.... it's not them. It's US! GET A GRIP!

PEOPLE WILL BEHAVE LIKE SENSIBLE PEOPLE WHEN WE TREAT THEM AS SUCH!