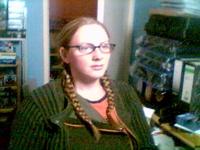 Well, eBay's back on, no thatnls to their so called support team! I finally found the answer on the message boards, when another highly miffed seller discovered the reason HE will getting these messages about his listing's being "wrong" was due to him being over £15.00 in debt on his seller fees....

I told them - without a shadow of a doubt - what they could do with thier help, and informed them of what the "problem" had actually been, how they had not helpped, and who HAD helpped. I told them they needed to sort out the problems, had they seen the message boards and how many people's business they had lost over this??

I got apologies from them, and assurances that this problems I outlines would be resolved etc.... and THEN I got a survey from them asking how I felt about their level of serive and help!!

Well, I enjoyed filling THAT in!

I would love to tell ebay where to stick it, but sadly, they are the best known auction site at the moment and I need the business I get through them.... Come on eBid and all the other rivals! Take the monopoly away from them! I'm signing up with you ALL now!!!!!!!