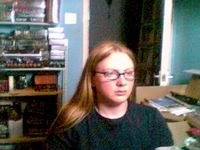 Groooo! I feel HORRID! I have a high temp, an upset tum, and all I want to do is sleeeeeeep!!!!!

Had a really nice weekend though. Angie from L&M college came over for the weekend. We went shopping, went to the fair ground, went to the pub and met up with Jill, watched movies, and played guild wars, ate pizza. All in all, a weekend doing all the things I love with a very very good friend! Doesn't get better than that!

In fact we're trying to sort out one last weekend before she goes off to uni at the end of the month. Jill seems really taken with her and has insisted we do it again! lol. Maybe this time my plans will work out right.

You see, this weekend I had hoped to have a big girly night out, but slowly it all fell apart. Andrea's little girl was sick so she couldn't make it. That meant that the curry idea has been put on hold until Andrea can come because that was a "me and Andrea thing". Fran did not reply to a single one of my text messages - maybe I have an old number..... - so meeting her was a no-go. When it became clear that these two were not coming, and I already knew Jill was already on a night out with other people and would only be seeing us for a short time anyway, the girl night kind of vanished. :0(

BUT the fair is in town. Yorkie wont go - but Angie said she did want to go, so after a pizza we got dressed up and offwe went. We got there tright at the end of the night, and just managed to get on three rides before it shut down. Then I got a text of Jill asking where we were and we met up in the Bobbin. She took us up to the Litten Tree to meet her work mates, and we had a nice time. So nice, that we're going to do it again!

I just wish I didn't feel like shit now. To cap off how ill I feel, eBay is FUCKED and wont let me list anything, and a sale I made from the web site might have to be refunded becasue Hobby Games is out of stock of JUST the things I need to send.

So I'm going back to bed for a couple of hours before I go and pick up my feller.

boldman said…
Hey, you have a great blog here! I'm definitely going to bookmark you!