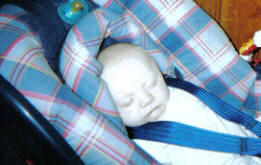 He's 4 months old, and seems to HATE him mum eating, as the poor woman hardly got any of her lunch down her, lol.

Jen seems to be doing very well too, she still has an amazing figure (grrr!) and I'm hoping we'll get a night out together soon like we used to. Steph has stepped right into fatherhood, and has no problems looking after the little tyke while Jen goes out. (Too right!)

Also went to MM today. What a laugh that whol place is now! Still no internet connection, so I dug out the Plus.Net number and gave them a call. 27 mins I was on holf to a 0845 number (not MY bill!) only to be told that our account has been cancelled due to "non-payment". What a shocker!!!!!!!

Now, last week, Glenn swore blind he had paid the Plus.Net account, so I assumed there must be a simple explanation. I asked them to try and take the payment there and then, as they have his card on file. Card was declined! So I hung up and called Glenn.

"OH, yeah," he said, "I know why it was declined, just a moment," and he puts the phone on MUTE! He was at Fest with "Fat Bitch" (rather than "Skinni-Bitch"). A few moments laster he comes back. "I had to cancel that card because some had used it fraudulently last week". OK, fine. BUT 1) You said you knew it HAD been paid, and 2) This payment bounced on the 1st of the month, not last week.

Anyway, I gave him the number to call, and all the details and told himhe had to do it, and left to meet Jen. Another waisted day at MM..... what is the point???