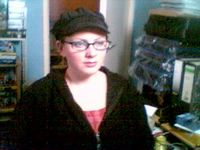 I think it's the time of year. I suffer from S.A.D you see, and I am trying very hard to get through this winter without my anti depressants. I'm doing all the things I should be: Got my "light box" on when I'm sat in the house on the PC, I'm going to the gym to get my body going (yes, I actually went today!), I'm eating properly (I'm doing Weight Watchers, so I don't have much choice about that) and I'm trying to get plenty of sleep.

But that's where the lifestyle changes fall down. Sleep. I know that one of the best ways to combat the symtoms of S.A.D. is to keep a regular sleep pattern, but that's difficult whent eh depression forms it self in such a way that it keeps you up at night stressing about things you don't need to stress at.

What doesn't help, is that I have been so stressed and depressed and wound up so much this year. That's largely down to the hassles at MM which caused me to jack the place in as a full time job; it was making me feel as depressed as I get in the dead of winter, so it was time to move on, so I did.

Now with the change of season I am feeling pretty low again. Not all the time, but often enough through the day for me to really notice it. I don't really want to be popping pills all winter, and even though I am finding it hard to sleep at night, I REALLY don't want to go down the sleeping pill route again. Hopefully it wont get that bad.

THINGS THAT WILL CHEER ME UP THIS SEASON:
THINGS THAT WILL WRECK ME THIS SEASON:
I suppose I could go and see my doc, who is great and very understanding, and get my tablets. I don't have to take them, but I can get them so that they are there if I need them, becasue I know that when I get really bad, I don't want to go out of the house to see the doc to get the pills....
My depression affects me badly when it hits, and it's a self perpetuating thing too. I get depressed, so I don't want to go out or see any one. If I don't go out, I don't get any natural light, I don't socilize with people, I don't excersie, I don't see the doc.... All these things make the depression worse, which in turn makes the results worse, which then makes the depression worse again.... You get the idea! At my worst point, I didn't leave the house or speak to anyone other than Yorkie for over 6 weeks, and only him becasue he wasliving with me. We ended up having a huge argument over it, and he pratically dragged me to the docs kicking and screaming. The doc gave me the sleepers and the anti depressants, and after a weeks good sleep, and a couple of week on the pills I was well enough to leave the house to go to college a couple of days a week, and to see people a bit. And i started to get a bit better becasue of it.
The idea now is to recognise the problems, and tackle them before thay happen. I know that I get like this between Sept & Feb each year, so now that's it's almost October, I really should get my pills incase I get really bad again. I'll have to pay for them, but that's a small price to pay when you consider the alternative. I'll try to avoid taking them - hence the light box and going to the gym to get the right chemicals flowing through my body - and I have to make sure I get out of the house during day light hours, even if it's only for a short while, EVERY DAY.
Now that I work from home, I have the very real danger of letting my illness get the better of me. It would be very easy to get slack and do nothing but stay in bed, or play computer games in the dark all day, shutting out the whole world. After all, who's going to get on my back about it? No one will fire me, or repremand me for not doing the work. So I have all the more reason to make sure I do something about it.
How do I avoid this then?
Simple. Yorkie can't drive, but he works out of town, doing 10 days of every 14 at work, and 4 days off. So I drive him to work every morning and pick him up every night. That means I'm out of the house twice a day. Until it gets well into winter, that means I'm in the daylight twice a day. AND once I'm out of the house, I am more inclined to do something while I'm out. I would hardly ever go out if it was just for me.
Once I'm out I might as well:
If I stick to this (and I'll have to drive Yorkie for a while yet, he's not even booked in for Driving Lessons yet) then I should be OK. But I'll get the pills just to make sure! And keep the Light Box on (and worry about the Electricity bill in Spring!)