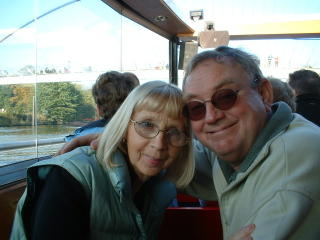 This is my Dad! (the one on the right, lol, on the left is Fay my step-mum)

Well, we went to Leeds yesterday, and from there went to York for the afternoon, and then I had to drive home again from Leeds, so I was too tired to post it last night.

We had a pretty nice day. Dad only showed himself up a small amount (the kind you can ignore, espeically since i's just the same old stuff that he's saying).

He LOVES his birthday prez from me and Yorkie though, and told me all about how he's wanted a go in a glider all him life - GOOD! That's why I bought it after all. It's nice to see he'll enjoy it though.

York was nice. We went to Dad's fave All-You-Can-Eat Chinese, so my diet is shot through again, but I guess it was worth it for his birthday (which actually isn't until Wednesday, but we can't see him on the day).

Fay told me some very worrying things though, about Dad. Nothing to do with the vast array of illnesses he swears he has, more to do with the fact that he can't seem to get his head around the money situation they are / will be in with this whole France business...... GOd, I hope he doesn't blow it. But I know what he's like, and it's nothing like he thinks he is.....