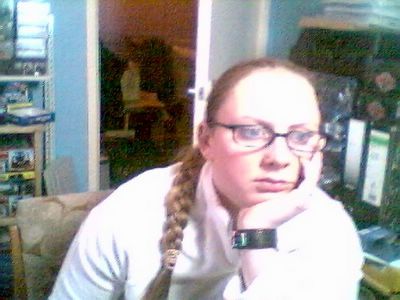 I don't know what's up with me to day. I am SOOOO board! And yet I can't seem to drag myself off to do anything, and now it's too late in the day as I'll be picking Yorkie up in half an hour.

It's not like I've not done ANYTHING all day.... I went to my WW meeting this morning (another 2lb, by the way, that's more than a stone now), had a nice time there. I've been to the bank and the post office and out some fuel in the car..... Not riviting is it?

I've been playing Sims 2 most of the afternoon, but I even got fed up with that after a while. I know there are things that need to be done - I have washing to do and the kitchen to tidy, new shower curtain to put up, but nne of that is fun either! I've been onto the WW messageboards, but there aren't many people on, so there's not much to talk about.

I think I'm just feeling sorry for myself really. I have a headache too. I quite fancy the idea of having a long hot bath with my book, and I probably will do just that later on once Yorkie is home and safely parked at his computer. I don't really want to go to the pub, or cinema or anything, and I'm not in the mood for company. I just want to slob about, but I want to be entertained while I do. You know the feeling.

I could have kicked myself as I was almost home in the car this lunch time. If I'd thought on I could have brought my gym kit with me to the WW meeting, and gone for a swim or a session in the gym while I was out and about. There was nothing stopping me from going and doing just that, but once I'm home - and I had already been out in the car twice today - I really couldn't be bothered to pack up my stuff and shuffle off again.