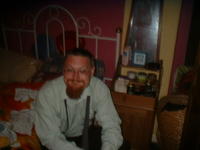 Hee hee hee! He'll kill me if he ever sees this photo! Look at that charming mug... my future husband!

I would like to point out he didn't know I was going to take this photo!

And he's 34 today! Bless! Poor old man! He's not felt like doing much today either. I don't think he's into birthdays much. He did like the prezzies though. I bought him Hitchhikers Guide to the Galaxy - new movie AND old TV shows - on DVD. Mum gave him £25.00 in the card she gave me yesterday too. His mum called him, and my dad sent him a card and called him too.

We were thinking about going to the cinema tonight, but there was nothing on that we wanted to see in Lancaster or Morecambe, and he didn't feel like going to Blackpool or Preston to see a film, so we snuggled up with Hitch Hikers instead, after a good long day of Guild Waring.

At least he's a cheap date!