At the risk of sounding cheap.....

Some of you out there might think that's sad, but remember I'm not the richest of people, and after all, fashion changes so rappidly that I do not feel inclined to spend a fortune on something I'm only going to wear for one season, maybe 10 or 12 times at the MOST, and evening wear is lucky to get out of the house twice in a season. George sell some real tat I know, but they do also have some very very nice stuff too, and very reasonable prices!

The reason I'm saying all this is because me and Andrea had a really nice "girly-day" yesterday!

Once I'd got home from taking Yorkie to work I had a text from Andrea telling me she was in MM until about 1pm, and that she had brought me some boots she thought I might like. Would I pop in after my WW meeting. Then she came on-line so I messaged her to say that as she was there now I'd come right over. After all, MM is only a 2 min walk away from where I go to WW. We had a natter, and decided to go for lunch after my meeting. Which we did!

Lunch (at Weatherspoons - we're skint you know) took over an HOUR! Not that the food took a long time to arrive or anything, but we were nattering that much! Hee hee hee, she was asking about my Dad and his mad-cap France plans, which sets me off on a huge rambling rant. Andrea laughs at my stories, I wonder though if she's not sick of hearing it, but she does keep asking, so maybe she does find it that entertaining, which is fine by me because it's a pet story for me. After lunch we thought we should do a spot of shopping. Andrea has a night out coming up and wanted a nice new outfit to wear..... naturally I thought this was a GREAT idea!

We did the few shops in Morecambe, with little success, and then drove over to our local Asda and Mattalan! Please don't laugh! Apart from the fact that the stuff is "low cost" we are both loosing weight, we don't want to spend a lot of money on something that's going to be too big for us soon!

We did get some lovely stuff though. Andrea got her self a beautiful chocolate brown gypsy / cowgirl skirt from Asd 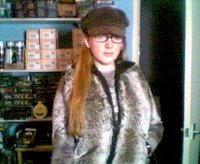 a and some jewelry to go with it. I finally found a faux-fur gilet that I was willing to pay for! It was only £18.00!!!! I tried it on and Andrea was telling me I looked so good in it I would probably have paid ANYTHING, lol! I also got a necklace and matching earings. It's a shame this photo doesn't do the outfit any justoce, but there's only so much of me I can fit on the web cam, lol! Trust me, with long boots and short jeans this looks great on me!

Andrea had taken half the shop into the changing room with us, and apart from the skirt was not happy with any of it - well, that's a girls perogative after all - so we bought the bits we liked and moved on to Matalan. We toured the whole place twice before we found what we wanted, but the outfit Andrea's picked is going to look great on her. She found a faun colored top and shrug, which are enough to cover up the gonna-get-cold bits, while still showing off the detail on the skirt.

By the time we came out of Matalan, it was dark, and the alarm went off on my phone to go and pick Yorkie up from work!!! We've agreed to go and do it all again soon, in Lancaster this time. We are going to treat our selves to something a little more up-market next time; Andrea wants to get a dress from Monsoon for Clives XMas do!!!!!!! I don't think I'll be buying anything from there, but I'll be trying it all on!!!