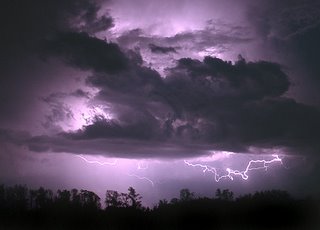 Do you ever get that tight feeling before a thunderstorm? Headaches? Something to do with air pressure and static in the atmosphere I think. It's kind of like that.

I'm feeling paniced. And about nothing at all. Daft isn't it! From about 3 yesterday afternoon I've had a nasty tight feeling, just between my chest and my tum. It's anxiety. I know it is because I get it sometimes when I'm depressed. When I was at my worst I was given beta-blockers by my doc because I was getting panic attacks. Not that I think I'm going down that road again. But the feeling is there, the kind of feeling you get at the on set of a panic attack. The biggest catch of that though, is that you worry so much about the threat of a panic attack that you can actually force one! So I'm trying to stay calm.

I was telling Yorkie about it last night (a warning more than anything else, as I'm likely to go off on one when I feel like this) and he was so worried for me! Lots of hugs and loves and niceness which helped to calm me down some. He was asking what was worrying me, and if I'm honest, nothing is! The business is doing well at the moment, I have a new car, MM is a hassle but not directly stressful to me at the moment, in fact, eveything is swimming along beautifully. There's no reason at all for me to feel this way!

Fay called me up this morning to sort out some more car stuff, and while she was on the phone she mentioned that dad was home (off work sick) and would I like to speak to him, so I did. We had a bit of a natter about what was wrong with the both of us, and his conclusion was that I'd feel better when I could drive my car again. I really don't think that has anything to do with my anxity, and tried to explain about the panic attacks. But I think they fall under the "not real" category with my dad, so I left it at that.

I should be going down to the post office now with some orders, but I'm finding "reasons" to put it of until tomorrow, like for example, two of the things I am sending are very heavy (so heavy I can hardly life them, let lone carry them to the post office) and I'm using that as a reason to delay posting ALL the orders until tomorrrow when I'll have a hand with them. Even though I know that it's really any more practical. I just don't want to go out today. I et a sence of dred when I think about it. That's a bad sign for me! But I do know that tomorrow I'll have no choice and I'll HAVE to go out.

I suspect that one of the reasons behind it is that I am due for my "jab" next week. I hate putting things like this down to hormones, but it's not impossible that as I'm due for my depo jab my hormones are out of wack and that - combined with the depression - has triggered my anxiety. I read thorugh the leaflet that come with my fluox pills today, and it does mentioned that if I suffer from anxity as a result of taking them I should come off them and see my doctor, but in the past he has given me these AND my beta blockers, so I don't think that's problem, and they've never caused this reaction before when I've been taking them alone. Having said that, if it doesn't get any better after my jab I will go and see him again to make sure.

it's a funny feeling though. Like when you're at work and had enough, and you want to get out and go home, or wiating for a first date and he's late. Only I feel like that in every situation. I go out, all I want to do is go home. I'm home and I'm not happy. I go to bed and I'm restless and want to get up. I can't focus on work, or on playing, or watching TV or reading. A nice long bath relaxes me, but after 5 mins I want out. I feel full of restless energy, but I have no motivaion to do anything about it, so I just sit and simmer. That's when I get argumentative and weepy. And the head aches are hell too. Everything makes me jump; the phone ringing fightened the life out of me earlier, loud sounds on the TV freaked me out too.

At least I know what it is, and that it will pass. I'll have to just sit it out. Like waiting for a storm to pass so you can go and play out again.