December 12, 2005
Funny how things link up here on blogger, isn't it! RainyPete's comments of Christmas Tree Hunting made me laugh, but when I picked up a wounded Yorkie from the Garden Centre today, out rang alarm bells for an international Christmas Tree Conspiracy to bring down the human race!

One stole Yorkie's saw and used it against him in this horrible and uncalled for attack! 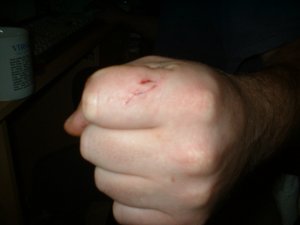 I've had a much less eventful day. It's really not easy going shopping with next to no money! Especially when you have no fuel in the car, and more expence right round the courner!

But it had to be done. We had no food left in the house again, so I had to buy some food for us and for the cat, and some loo roll! Those are things we cannot be with out! I also filled the car up. Something else we can't do with out is fuel in the car.

But..... As we're out on Yorkie's staff do tomorrow, I wanted to buy some new clothes. And it's more than just a "Night Out! Need New Clothes" thing, I have lost so much weight since I last went of a posh night out that nothing I own which would be suitable actually fits any more! I scowered Asda's George collection for anything that might do. It's cheap and cheerful there, and some stuff is really nice, but I could only fine one thing I liked. Luckily it was on sale at just £8.00!! Bargain! So I went to try it on, and if I was 6 inches taller it would have looked brilliant on me. Sadly I am a short arse, and it looked HORRID! So it went back.

I went across to Matalan after Asda. Also cheap and cheerful, but hey, I'm on a budget here! And I did actually find a nice dress, which fits, and which I would just afford! So I snapped it up, and a tiny little jackety thing to cover my shoulders up with. I'm slimmed down, but that bit that's under my arms still isn't great, so I want to be able to cover that up.

I tried the whole thing on when I came home from picking Yorkie up, so I could get his approval or disaproval. He's responce to every "what do you think, is it nice?" question was "mmmm-yup" in that non-commital way men have. Grrrr. I'm taking this as he doesn't like it much. But I think I look good in it, and it's too late to take it back and find anything else, so it's tough.

Money's an issue right now though, as well as it being Christmas and all the expence that goes with it, I STILL have the car repairs to worry about, and it seems that the cheque I sent for my car tax has bounced, so I have that to pay for again in the next 7 days or else. What I really need is for a large sum of money to just land in my lap, but as that's not about to happen, I'll have to muddle through. We'll get by. We always do, one way or another.