March 03, 2006
I have spent the last few days feeling like utter death! It started on Sunday really, It started to cough a little bit while me and Fay were watching Dad fly. Just a small cough, a bit of a sore throat. By the time I'd got back home to Lancaster I was feeling pretty grotty and have been getting steadily worse since.

Monday night I couldn't stand to be in our bed any more. I needed space to move, I needed to be close to a constant supply of drinks and tissues so I went down stairs and fell asleep on the settee. I've been either on the settee or the futon ever since.

On wednesday I had a appointment with a chap from Computeach. Yorkie was insisting that I was "too sick" (but as he seemed to think I was perfectly well enough to ferry him about, do the shopping, keep the house spotless while he turned it into a shit tip around me, I told him to fuck off). I had the meeting and learned that I don't have 5 grand to spend on a class which will treat me like an idiot for the first 6 months while teaching me what I already know, and provide me with student edition softwear I don't need because I already have the full professional version. I also desided that I was too sick to do the usual ferrying and ass wiping I normally do for his lordship when he can't "remember" to buy my lemsips or tissues.

He went out on Wednesday night, even though it was his day off on Wednesday not Thursday, and sure enough he came home at 1.30 am fucked out of his head, argumentative, verbally abusive, and all the rest. It came as a bit of a shock to him in the morning when I refused to drive him to work and sent him off for the bus. He was home again in under 20 min unable to get his shit together. He'll get his ass kicked at work today because he didn't even tell him he wasn't coming in.

Can you believe that it's my fault he got so drunk on Wednesday? It's my fault because he didn't have anything to eat ALL DAY on wednesday. Hummmm, well, lets see, yes, we were BOTH at home ALL DAY, and we do have some food in, only because I was ASLEEP ALL DAY BECAUSE I HAVE FLU he didn't eat. Therefore MY FAULT.

You know what? I didn't eat either, because every time I tried to move I threw up all the biel that was filling up my tum while I slept. Funny how that doesn't inspire hunger or an urge to cook isn't it! Infact I haven't eaten at all between tea at Dad's on Sunday night, and last night when I "informed" Yorkie that he would be cooking. 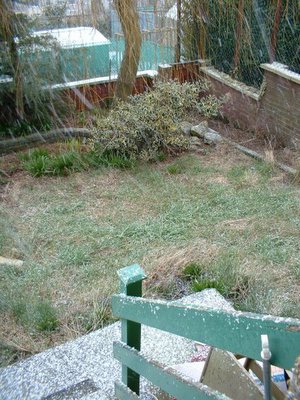 ing at long last. I think realising that I am actually ILL (and not pathetic "man sick" where fellers think they are dying because they sneezed once) and that means he has to look after himself, so he got a plummer out and paid for the pump fixing. Voila! Heat! Shame it had to wait until Thursday for him to get a guy round when he got paid on Monday. But then, I was still wiping his ass for him in Monday.

I'm a fucking soft touch though. Because I have slept now almost solidly from Sunday evening til today I am feeling much better. I've been living off lemsips (which I had to buy the first two lots of) and nothing else. I'm still sick, I can't face the idea of much food, and can't taste anything anyway. My heads still stuffy and I am a walking snot factory, but at least I am walking. So I've had a bath and got dressed. But it's snowing outside (on March 3rd! Insane) so I've got a message to my ungreatful wretch of an other half and told him I will come and pick him up so he doesn't have to get the bus home in the snow.

I should make him fucking WALK!