March 14, 2006
So, yeah, a couple of weeks ago now, I went down to my mum's on the sat night and stayed there for the night, having a disccusion with John about Yorkie's suit. John is insisting that I talk him out of wearing a green velevt suit for our wedding, and I tried bery hard to explain that if I was capable of talking him out of it I would have done it by now, but missed out the fact that I hae hardly tried because I know how much he wants it and I'm just not that mean.

The following day I drove mum to Leeds where we meet up with my step-mum fay (much to my dads horror) and together the three of us went to the wedding dress people where I had another fitting and my meaurements taken. We talked colours, fabrics, detailing etc, and together the three of us came up with the ideal dress. Fay handed over a cheque from my dad for the deposit. The deposit is HALF the cost of the dress..... which is Â£1275!!!!!!!!!

On the wednesday Yorkie and I spent a day ring shopping, and fabric hunting. The night before we had scoured the internet looking for rings. Because of the nature of his work, gold is not an ideal choice of wedding ring for my feller. Gold is after all a soft metal, and he wants titanium instead which is more durable. He also wants a cetlic design. Very nice..... very difficult to find! We did find one site that had pretty much what he wanted, and there are some rings on it that Ireally like too! I want a two colour ring to match my enagagment ring, and I love the idea of celtic designs which i never thought Yorkie would want. Like I said, he needs something durable, and would love for us to have matching rings. These are some of the rings we liked: 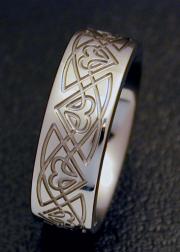 Yorkie realy likes the more angula design, and I want to have gold inlays like the second ring, so if we can get rings that combine the two we're onto a winner.

The problem is that we have only found one company that makes these rings, and they are in the states while we are here in the UK. There are plently of people who make titanium rings in the UK with gold inlays, but none that do the celtic designs. They are all very contempory banded rings, which are very nice, but not "perfect" for us. Still, we have time to keep looking, and the banded rings are nice... if it comes to it, we'll settle for those, but, well, you know. You want the perfect ring when you think that - hopefully - we'll be wearing them for the rest of our lives. 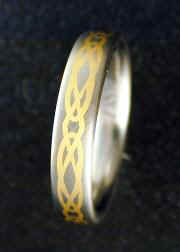 Like I said, we also went fabric hunting for his suit. I had brought back some linning fabric and some dress velvet samples from the wedding shop in Leeds. The dress velvet is SO lovely! It's almost black, which suits me, and it's soooooo soft and lovey! But every one we talked to in the fabric shops pulled faces and said "Trousers? In this? Mmmm..... It'll wrinkle like mad and look horrible!" or "Velvet in summer? you'll cook!" or my fave: "Are you going as Robin Hood?" And that was an honest question, not a piss take! we ended up with samples of curtain velvet too so that when his mum came round on saturday to measure him and start making the plans and patterns she could compare them all.

So, on Saturday our mothers met for the first time, and I think it went pretty well. I went slightly mad, and started baking on the Friday and carried on into Saturday until my mum arrived. I made a two-layer sponge cake with jam filling and icing, a dozen chocolate chip chocolate buns with green icing and chocolate sprinkles, shortbread biskets, and scones! About an hour after my mum arrived (with photos of Isabelle, Mannie and Monnic, with a very sad letter explaining the cot death which Ron and Janette had sent out to every one) Kate and Dave arrived. My baking seems to have gone down well as most of it got troffed pretty quickly (YAY!) and we showed Kate the fabric samples, the pictures of suits Yorkie had collected from the web that he liked, and my dress photos.

Now, my feller had been focusing largely on those short jakets with the long tails.... know what I mean? Hang on, I 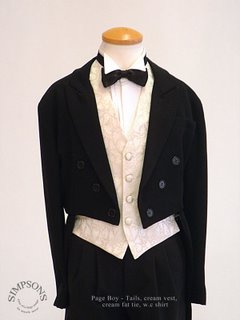 have a photo somewhere:

In order to have this he would have to have the curtain velvet, as the dress velvet, even lined, would be far too light and would crinkle badly.... and the trousers would HAVE to be something other than velvet or else he would look like a scrunched up mess within minutes on donning the suit.

BUT as we were persuing the web something else had caught his eye. Now, please don't laugh until you've seen the photo... it sounds dodgy, but once you've seen it you'll understand! Trust me on this!

Bear in mind that my Yorkie is a tall and broad chap, think Morphius, not Neo, in Velvet instead of Leather or PVC... Sound scarry? It's not, really it's not. You see, if he has a nice long jacket he can have the dress velvet, which is so much darker, nicer and generally sexier than CURTAIN velvet. With it being long it will weight more and hang better so it wont crease as much, and with a heavy lining it should be fine. it also means that he can have the trousers, because even if they do crease the worst of it will be hidden by the jacket! Cunning, yes?

Here's the photo- and yes, it is an actual grooms suit: 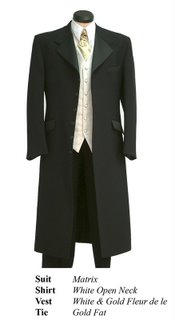 Now, I think that's quite nice! And in the almost-black-green-dress-velvet it will look brilliant. Also, please remember that we are getting married in a stately home and I think the length of this "moden" jacket, in the "period" fabric of velvet will be brilliant. I think he might just pull if off well!

So I am no longer panicing about Lepricauns, or St Patricks day, or any of the other things that were givingme nightmares. Kate has been very good at putting my mind at rest, and to be aposlutly sure that the fabric will hang right, she is going to make him a test-suit out of some old brown dress-fabric curtains she has stashed away somewhere! I just PRAY I can get a photo of that to post on here.... with him in it!

Kate's also going to make the nephews panaloons / bloomers out of the same velvet, with sweet little shirts made of the same colour fabric of my dress or Yorkie's shirt (depending on where we go with that) and I cleared up wether or not I had offended her by assuming she didn't want to make jacquie's girls dresses (she said "Oh GOD NO!" and laughed, so off the peg is ok there).

After we had sorted all of this out kate took us all out for a pub lunch, and then they all dissipated and we were left to hoover up the last of my baking (I have gained weight again!). Mum passed on her address and phone number to Kate and Dave inviting them to hers so she could show them Towneley Hall and get to know them a bit better - which proves she likes them, and Kate sent me a lovely email to say she thought my mum was nice, that she would take her up on a visit, and that she liked my cake! So I think that was an all round win too!

I'm off to Leeds again this weekend for another afternoon of measurements and dress gubbins too. Considering this wedding is still 16 months away, things seem to be steaming ahead! Thank god we're only supposed to do this ONCE IN A LIFE TIME!