I'd never been in a police van before! 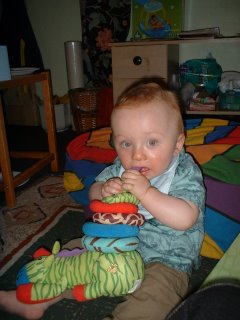 It started off as a pleasent enough day... Jen was throwing a birthday lunch for her son Adam's first birthday. I'd said over the weekend that I would go, but that Yorkie was at work. On monday he told m he was actually off Tue and Thu of this week, so he could ocme with me after all. Although he pouted about going, demanding to know who else was there and informing me he "could have done with a nap".... Grr

But anyway, we went. He was miffed about us walking across Lancaster to go when we have a perfectly good car, but Jen had said that there would be wine for the adults and I fancied joining in with a drink and had put aside a bottle of Merlot to take with me. So knackers to him, I was going, I was having a drink while I was there, and to hell with his mood!

Typically when we got there there were plenty of people that Yorkie knew, not just mums and babies (HA! Told him so!) Infact, shortly after we arrived Mark turned up too.

Most of the family stayed in doors, the rest of us congriated in the back garden as it was a lovely day. People who I only really knew the faces off were there, regulars and staff from our second pub the Yorkishire House (also called the "Yorky" to confuse people) and it was nice to actually get to know them instead of just nodding and smiling when we meet.

The party was supposed to finish around 4pm, but as most of us were still there nattering at 8pm - regardles of the fact the birthsday boy had gone away with his gran for a few days and had left - we thought we might as well all go down to the Yorky together.

From there on it's a bit of a blur. During the party I had necked several glasses of wine, and when we'd finished that off I joined the guys in their can of guinness. Headache on the horizon! But we were all feeling good and happy in the sun so it didn't matter much.

Got to the Yorky, watched a band, nattered to various people and made new friends, and at one point my Yorkie stagered over to me and informed me of something VERY important. Unfortunatly it came out as "Muuurgh bibble muuummmmmmer" so I jut said "OK babe" kissed him and carried on with my conversation. When he didn't come back for an hour I stared asking people where he was. Apparently he'd gone to get food for people and would be back soon. A damned good idea as we'd only had scambled egg and potatoe waffles all day.

Another half hour passed and he hadn't come back, so after some discussion with Mark, Gemma and Jen I went looking for him. If he's gone for food chances were he was at Starvin Marvins again. We like our routeens when we're drunk, they act like homing beacons!

So I go there and there's no sign of him. I got chatting to a couple of guys in the pizza place, one who was trying to chat me up,and his mate who was laughing at him, so I explained that I was actually about to get married, but some how lost my intended, and generally had a good laugh with them while the pizza was cooking. We got our food at the same time and I left with them. The offered to take me to get a taxi as I was clearly pissed out of my skull and alone. I accepted, and almost immediatly fell over the cross-legged-on-the-floor-in-the-middle-of-the-street feller of mine!

Said good bye to the new friends and sat with him, trying to rouse him from his slumber. But I was unsuccessful and he just fell over sideways. SO... While I tried to wake him up I troffed my pizza. No point letting it go cold after all.

And while I was sat, a number of people approched me, saying things like "Are you ok?", "Is he ok", "Do you want us to call you a taxi", which was all very nice. Then came the better comments; "Oh, I've called the police to come and get him", and "Should I call an ambulance".

It was the "police" thing that sobered me up slightly.

Sure enough, a few moments later a Van turned up, and I assured them he would be fine. I was taking care of him, I'd get him on his feet in a few moments andwe'd be off. After the police car had circled and stopped to check on us 4 times, I relented and said "ok, send the van back". I was deffeted! i couldn't left him, I couldn't wake him up, all he did was mumble and vomit at me.

Police Van arrived. It took 5 of them to lift him off the pavement and throw him into the back of the van. Once policeman inparticular was very concered that Yorkie might throw up in the back of his van. I knew he would, but said "No, look, he's been sick. He'll be fine now". He wasn't....

I was given a helpping hand into the seated area in the back (well, middle) of the van with Yorkie slung in the very back (the paddy waggon bit) and we were driven home. As we pulled up outside my house, on our very very quiet street, at midnight, it occured to me that EVERYONE would see this. Doom....

The concerned policeman got out and helpped his collegues get my feller outof the van, saying "He better not have - he has, he's been sick in my van!" Funnily enough, this is the only line of the night that Yorkie can remember! 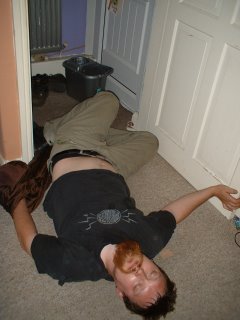 My feller was put on the ground where he crawled on his hands and knees towards home, being guided by the police like a dog herds a sheep, only not quite so well. He crawlled head first into the garden wall, and had to be guided round while I ran to get a bucket to swill the police van out with, although the turned down my offer of assistance in cleaning. Once in he collapsed on the floor hal way between the stairway and the living room, so I left him too it, and sent out a text to Jen to let her know what had happened as she had been texting to see if I had found him and if we were both still alive.

Rainypete said…
Poor bugger. I've not done that to myself in a long time. Years ago I had a similar run in with a door that was latched that usually swings open when a drunken head connects with it. Laid me out for an hour or so it did!
1:03 pm

MummaWalker said…
Hee hee, yeah, I do love him. More than anything. The story does have to be taken in context though, it's not like he's an alcholic who is drunk every night or anything. We hardly ever go out any more, and he thinks he can still drink like he used to when he was much younger. Clearly, he can't! And he is such a love the rest of the time, supporting me in my business, helpping me with my depression, and generally being great.
11:34 am