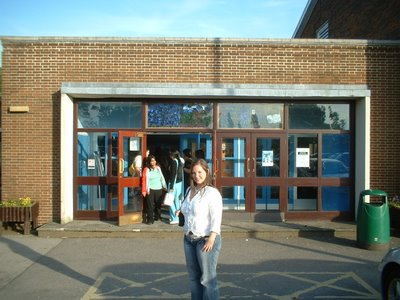 Angie - Outside our old High School
I'll admit now that I am having a massive adrenalin come down, I've got a hang over, and I'm feeling pretty shitty. But I have had a brillaint 24 hours so it's worth it!

Angie arrived at my mum's around 5.30ish, and instantly it was like the years we've been apart just hadn't happened and we just picked up conversations where they'd left off! There's something to be said for a friendship that doesn't just stand the test of time, it behaves like time just doesn't happen!

Mum cooked us steaks and chips (yum yum) and kindly dropped us off at Walshaw around 7ish. It's so strange being back there! Familiar old feelings - not all good - started to well up even as we drove up the schools drive way, and old habbits just fell into place; mum even dropped us off at the exact same spot she used to drop me off at when I was a student there.

There were loads of cars parked round the school, but it didn;t seem like there was a lot of people there. Some of the old teachers were there, none that particulary ment anything to me. I think Angie was thrilled to see Dr Perry though...! (hee hee hee)

The place is a dump though, which was really sad. The old (original) part of the school was a wee bit run down when we were there, but it's really gone down hill now. The cracks getting bigger and bigger. The paint peeling off in huge chunks. It was sad to see. Even the newer buildings like the ones that were built while we were there (1990-95) were looking shabby.

it didn't look like anyone we knew was going to be there. There was no sign of Ailsa - which I am gutted about - and we didn't clock Akila until we'd toured almost the whole of the open areas of the school. The problem was, she was with Sabeeha!

Angie spotted Bee and her sisters before I did and scooted me up a flight of stairs before she spotted us! But when we finally found the room dedicated to our years that's where they'd wound up too. So we wondered round a few more rooms waiting for them to clear off. But they took AGES so we snook in behind them and just kept our backs to them.

Childish? Maybe, but things can be like that some times.

There were photos all over the walls and tables, mostly of others years than just ours, but we did finally spot our area... and I was on a gread total of ONE picture! Hee hee hee! What can I say - I never did like having my photo taken, and I was really really good at not taking part in a lot of things! I was in the netball team VERY briefly, and I was in the choir for ages, but almost always missed the photos. It was one of those that I was finally snapped on. Looking unhappy, lop-sided, big eared, and generally crappy. But, unlike so many others, I was not suffering a 90's fashion crisis (I never did follow fashion, I just looked generically crap, lol). Angie was on a few of the class photos too though, and had a giggle at her fringes over the years. She's much better than I am at remembering the names and faces of the people we were at school with. If they weren't a close friend of mine I seem to have blanked them from my memory!

Before we knew it, it was 9pm and people were getting ushered out of the school. We took a last sneeky look down into the gym and changing rooms (which looked tatty as hell), and the Hall, before reluctantly leaving the building and calling a taxi. Akila, Bee and her sisters were sat up on the terrace, and Angie was unsure about what to do. She's still friends with Akila - I have nothing against the girl - but when she waved Akila didn't waveback. Maybe because she was sat with Bee? We weren't sure. but then, suddenly, Bee spotted Angie and waved, and they came down to us.

Ack, doom! It looked like I was going to have to speak to Sabeeha after all. But in all fairness, we were civil with each other - all be it through gritted teeth - and after a chat Akila hugged me, and then Bee hugged me, and they left. There was no offer to exchange phone numbers or emails from me or her. Funny isn't it, when once upon a time we'd been the closest of friends. And a nasty little part of me was SO happy that she looked as fat and frumpy as ever, while I ahve lost weight and look pretty damn good compared to my school days, even if I DO say so myself!

Me and Angie, on the other hand, were doing GREAT so we beggered off into town to get smashed! Burnley is so different now, while being exactly the same as it always have been, if you get my meaning. All my fave places have gone, none of the faces I see are faces I know, but the fashions seem to be on a re-run, as is the music, and one we got nattering it didn't matter that town was different, and I got a good tour of the new places.

She makes me laugh so much though, in a good way. While so many things about us are so similar - like problems we've had, emotions we've had to cope with etc - some things are so different. The way she looks at men amuses me, probably as much as my way does her. She loves good looking, young men. That's her thing, and if a guy isn't drop dead gorgeous he doesn't stand a chance. Me, well, if they make me laugh and we have enough in common I'm away, regardless of looks (unless there's something that really freaks me out about them) and the comaprisons we were making just had me in stiches!

We got pretty heavily smashed - I think. I don't remember feeling that drunk, but I was on GnT and VK Blue, so I felt wide awake. Angie had been drinking coke with her Vodka too so she was pretty hyped on caffeen too, and even though we didn't get back to my mums until gone 4am we still ended up nattering until around 6 before we both passed out. Mostly we talked about fellers and sex, and school and people we knew, both friends and bullies. It felt like a school sleep over. Exactly like when we were in our teens, only the conversation was a bit more, well, how can I say it. It's not all theory any more! We've got actual expriences to talk about now! Which made it better.

In fact it was a great do all round. I'm hoping that Angie will be able to come over to Lancaster for a weekend and come out with the wives and girlfriends soon, maybe when Jacquie comes over too if i can sort out space for everyone all at once. I really don't want us to get distant again. She's always been a great mate, and I've had enough of loosing them!

Speaking of which - Andrea, if you're still reading this, GIVE ME A CALL! I've been trying to text and email you for weeks. Where've you gone?