Went over to Jacquie's on Saturday morning (minus my feller who chickened out at the last minute), we had the Bon Jovi consert to go to on sunday at the City of Manchester Stadium.

Saturday was fun, it wasn't far off lunch time when i arrived, and the sun was beaming down on us. Typical as I had forgotten to bring the sun cream I had bought Yorkie. As he was off work all weekend I was going to borrow it. So me and Jacs and the girls headed to Boots so I cold buy some sun cream and sun glasses, and then went for a pub lunch. The local brewers fayre has a great out door play area so Caitlin and Mia had a good play while we had a catch up. We'd left David at home to clean up (he's well trained that one :op ) and prepare the back garden for a BBQ. I still manged to get a sun burn though, my arms and chest are singed!

Caitlin made me laugh so much though... the things she comes out with! She was asking me how old I was, so I told her. She thought 26 was very old - even older than her mum (who is actually 27...) then she asked if I was EVER going to have children. 26 clearly means I'm past it... When I said I would be trying to have some soon she miss-heard or miss-understood, and thought I was going to have a baby in "2 minutes"!!!

Although spending time with Jacs and David with their kids makes me wish I was having one now.

Sunday was consert day! David's mum cooks everyone breakfast on a sunday so after dropping Caitlin off at stagecoach we called round for baccon and sausage butties (yum yum!) and a nice lounge in the back garden watching the children play - some of Caitlin and Mia's cousins were there too. After an hour we picked Caitlin up and she joined in.

About 3ish me and Jacs picked her mate Leigh up and we drove into Manchester to see Bon Jovi - after some panic about times which were NOT printed on the concert tickets, and eventhe girls on te information line didn't know what time it started. Jac's bro Paul and his fiancee were there too. I wish I'd taken my camera - the camera phone just didn't do the job. On the tickets there was all kinds of rules for what you couldn't take with you - like yourown food, drink, booze, cameras of any kind, no smoking etc.... Should not have paid any attention to ANY of it! not only did no one really check my bag (they just looked in thorugh the top, and I could havehad ANYTHING hidden under the coat I had inside it), but every one else had camera, was smoking etc, and as for the no alcohol.... THERE WAS A BEER TENT AND PEOPLE WALKING ROUND WITH CANISTERS OF BEER AND SMERNOFF ICE ON THEIR BACKS DISPENSING IT TO ANY ONE WITH MORE MONEY THAN SENCE! Not happy about that at ALL! 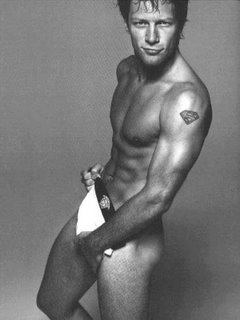 Having said that, it was a brillaint do. OK, so we were sat almost as high as you could get - standing up to dance was a bit like taking up an extreme sport, and Leigh wouldn't do it at all until the last song of the night! The support atcs were Nickleback (who I liked anyway, but who are BRILLAINT live, I recommend them to anyone, even Paul who said he didn't like them at all said he thought they were great live) and a new band called The Gekko, who won the chance to be there on local radio (Check out their MySpace page http://www.myspace.com/thegekko) and - had their equipment been up to the same standard as JBJ and NB - they would have brought the house down. They are pretty good, honest, check them out.

Bon Jovi them selves though.... well.... *swoon* I forget how much I like them sometimes. The new album isn't their best, and I think they know it as they hardly played any of the new stuff. But that's the greatest thing about seeing Bon Jovi live, they play all the best stuff from when they started right to today.... all the fan faves! And there's always Jon's ass bouncing away there too in those tighter than tight pants!!! Mmmmm! I swear me and Jacs spent more time perving over that ass than we did singing! 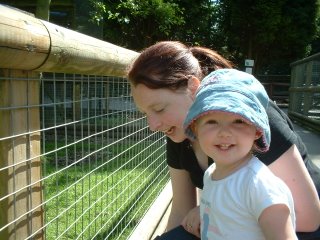 Monday morning was a little more sedate and family-friendly! It's still scorching hot and beautiful, so after David went to work me and Jacs took the girls to the park for the morning. I forget the name of the place (I'm Jacquie will remind me at some point), but it's HUGE! There's a massive play area for kiddies of ages, a childrens zoo with goats, rabbits, ponies, donkies etc, a bouncy castle / slide, crazy golf, pitch n putt.... loads! The girls had a good long play, then a walk round the zoo bit. I paid for Caitlin to go on the bouncy slide thing and bought some ice creams for us all before having lunch at Mc Donalds and a good session on the play area there... I swear those kids are pure energy! i don't know HOW Jacs copes so well! But they are both so cute and so sweet! I have a few more photos for Flikr which I'll post in a bit. 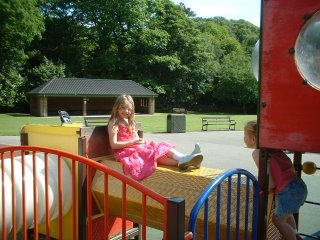 I left about 3.30 and the long drive back to the "real world" was depressing. I forget sometimes that I do need to get away from home some times. I'm going to have to find a way for me and Yorkie to get some kind of a break away soon. Some kind of holiday, even if it's only for a night or two.

Max said…
We saw them at Coventry last night!