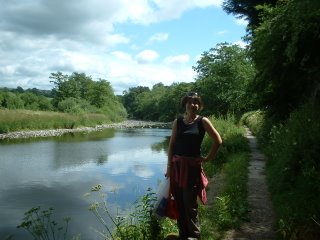 Got dragged out for the day by Debbie.

I dropped Yorkie off at work and swong round to pick Debbie up, she was going to drive but I always feel happier driving my self for some reason. Plus, I'm STILL half deaf in one ear and I can't hear the driver if I'm sat in the passenger seat, but i can hear a passenger when I'm in the driving seat...

First off we went to the Crook O Loon for a walk, which was pleasant enough. The walk it self ended up being pretty pointless as you walk round in a big circle and there's nothing to see or do... well, there's nature and the Lune river which are beautiful, but what I mean is there's not monument, or specific viewing area with a plack of information etc. There was a field of young bulls that we had to tip-toe through though! That was interesting! 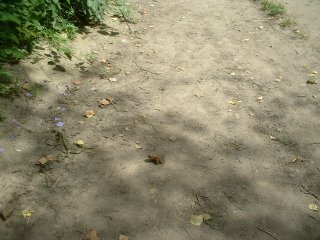 Next stop was Kirkby Lonsdale, a lovely little place - it's also where Esther is with her Kitten Fever stuff that I sell so I have been before but only on business. We had a wonder round some of the shops, and a coffee in the garden of a posh little cafe, and then a short walk along the Lune. Where we met a tiny tiny toad! He is in that photo some where, honest!

Our last stop was Dent (Click this too). There is the story of the Dent Vampire, and a good long while back Dad took me to see it. Debs had been with her ex but never found it so I said I'd show it to her. Could I find it? Could I hell! So we pounced on the church's gardener / grave digger and asked him to show it to us. He had clearly been asked this a thousand times, and he loved it! He told us that it was cursed to look upon it, and first showed some of the other local legends (you should go and have a chat with him, he's great) before finally taking us to the grave. 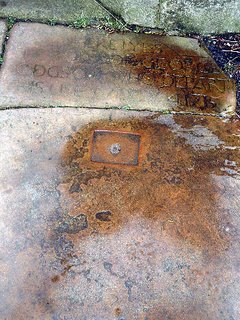 The story is a close guarded secret... and you wont even find much of it on the WWW! But there is a date on the tomb stone there that you can just about see, and the grave is right up against the entrance to the church. What can I say, you'll just have to go and find out for your selves!

Just dont stand there and gaze upon it at midnight!

It seems a little unfair that - even though we set off from Dent with over an hour and a quater before I had to pick Yorkie back up from work - we ended up being our usual half hour late. Poor bloke! At least it hadn't started raining yet! And I had brought him some prezzies in the form of a tin of sweets for the car to sooth his cig cravings, a pork pir from Kirkby (the best in the region - and the last in the shop! Even me and Debs didn't get one) and an elephant on a string of bells (don't ask), so we were forgiven!

All in all not a bad day, and lets face it, I could do with the excersise. Although I shall have to hammer it home to Debs that just because I spend half a day walking it doesn't mean I can spend the other half eating. She was horrified that I only brought a healthy lunch, and when dragged round Booths for cakes and pasteries I only bought 1 egg custard (for a bargain price of just 16p) and that was under protest. Just because she is thin to the point of being ill and needs to gain weight doesn't mean I have to match her bite for bite. I'm gaining weight as it is! Must to more walking and less eating!