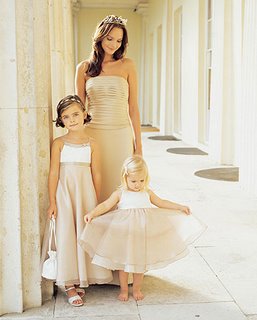 This is the dress that I will be wearing to Jacquies wedding!
She's hopping to find some dresses for Caitlin & Mia too, we looked at the ones on this photo that the little girls are wearing, but apart from there not being those dresses available in the right sizes (damn those summer sales) I'm not so sure that they are the ones Jacquie wants. The colours don't actually match the adult dress!

The original shopping trip was a complet wash-out though, I felt really sorry for Jacquie. It was supposed to be a shopping trip for both her wedding in October, and her brother's bride to be whose wedding is on August bank holiday. So, other than myself and Jacs there was her mum, her older sister and her brother's intended, plus a host of kiddies, and dresses were supposed to be found for the little girls for both weddings, for Jacquie to wear at her brothers wedding, and for me to wear at Jacquie's wedding.

Her mum seemed to have NO intrest in dresses for Jacquie's wedding what so ever, unless it was to try and convince her that the same dresses could be used for both weddings! Jaquie even found some dresses for her girls for her wedding and her mum just wandered off! She said to me "oh, well, you don't mind making another trip, do you"... I love going to see Jacquie, but it costs me £25 to get there and back, and then there's food to consider, and Yorkie's bus fair to and from work as I am not there to drive him, and to be honest, I can't afford to be doing it! In the same way, Jacquie can't afford to come to Lancaster or Preston on a whim either.

I asked Jacs if her mum was on a strict budget or something, and the answer was a resounding "NO! They are loaded!" I'm not supprised if this is an example of tightness! It's not like the dresses cost a fortune!

From what I have seen her mum is very cutting with her comments, often making reference to Jacquie loosing weight or something similar which is completely uncalled for. She refused to look after Caitlin for a couple of hours while me and Jacquie continued our shopping trip, but had no problem looking after Jacs older sisters 3 kids...

Anyway. She's not my mother to complain about so I'll leave it at that.

David and his parents took Caitlin for us, and they already had Mia, so we went into town just before it closed and had a look round. We found this dress and a matching wrap at a bargain price (dress was only £50, wrap was £8.80) and snatched them up just as the store was about to close. It's - clearly - not the red she was hoping for, but gold was always going to be the second option as it is part of the colour theme.

Saturday night we went to the cinema to watch Pirates, dead man's chest (3rd time Jacs has seen it, and I can see why!) and I LOVED it! It's going to be a well loved addition to my DVD collection as soon as it comes out!

When I got back yesterday I drove directly to Yorkie's work to pick him up, hoping that he had actually made it into work after Colin's stag do last night, only to find out that he HADN'T GONE to the stag night! He had fallen asleep after eating almost all the cheese in the house (good news for the diet then) and missed it!

MUPPET! See what happens if I'm not there to look after him *sigh*

Although, he had come up in a rather nasty rash all across his shoulders and right down his back, and the skin on his forehead is very red and lumpy too, so I suspect that he is actually not very well, and that is the reason he fell asleep so early and for so long. He's gone to work again today though. I hope he's ok.