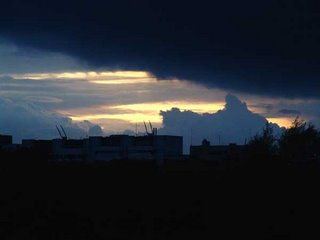 I can tell the seasons are on the change you know. Appart from the obvious like the months changed etc. I mean I can fell the effects on my mood already. I don't normally feel like this until, what, back end on October, November time? This year it's come on early.

I think it has something to do with the weather we've had this year. July, being SO damn hot and bright (which raised my mood to all new wonderful levels), followed by a wet and moody August, and a dark and damp September. It feels like November out there! (Which has me crashing down like junky two days after the last hit)

Thankfully I have an apt at the docs tomorrow afternoon. I need to sort out a few things, like my ears (which are STILL giving my grief) and my "pill" perscription needs renewing. I'll have to ask for some more Fluoxotine while I'm there and start on it sooner rather than later.

It's something I am adding to ever increasing list of failures in my life;

I know I have a lot to be thankful for, Yorkie himself was the first to point that out:

It's the little things that get me down though. Like, for example, I went out last night to collect my Avon orders, and instead of the usual 9 or 10 people placing oprders, getting me about £125 worth of orders, I only got 5 orders for less than £90, which only earns me about £15 after I've paid for my supplies. That made me feel like a failure, even though there's nothing I can do about it. People are skint at this time of year - just had summer holidays, kids going back to school need supplies, etc.

And it's this kind of things that drives me crackers about myself! Knowing that I am being stupid and over sensitive about things, but not being able to STOP myself from feeling like that.

Bring on the Anti-Depressants! I'm ready for them NOW!