Busy old time of it!

November 15, 2006
I know I've been useless with my blogging just lately. But it's winter now and the season is taking it's toll on me. I'm back on my anti-depressants again, back to not wanting to get out of bed in the morning, and now I seem to be suffering from constant head aches too....

Things have been going on though and i do need to get them written down. So here goes!

I don't see much of the old geezer these days what with him living over in France now, and while he still doesn't have his house built yet - much less have a computer connected with Skype and a Web Cam - I have changed a little. I have lost some more weight (Hooray! Being a cleaner sure sheds those inches!) and I have become a red head.

So when he came back to the UK for a few days with Fay and his new best mate / neighbour Ivan and his missus, and asked to see me on his birthday, I guess I should not have been shocked that he walked right past me in the Plough Inn pub we were meeting at... he didn't recognise me!! Wonderful! 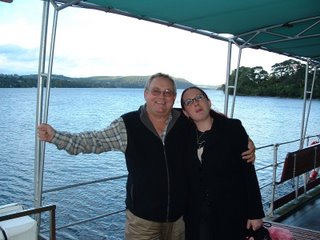 I spent the day with them, which was a typical dad-day involving driving round at many miles over the speed limit trying to cram in as much of the Lake District as possible in 6 short hours. not an easy feat! It meant poor Fay calling the Ullswater Boat and begging them to hold the last trip for quater of an hour so we could get there and show our French Friends the lake....

Still, it was a nice day out and it was good to see dad again for a few hours.

Then there was 21st Oct and Jacquie's & David's wedding

Which was a lovely do! Shame my photos doesn't do the day much justice, but I'm sure she'll let me have a copy of some of the better ones soon to share with you. not convinced her to join Flickr yet (but I'm working on it!)

It was an early start at Jacquie's, me and Yorkie had stayed there over night with Jacs and her girls. We dropped Yorkie off at the hotel to meet David and the rest of his people first thing and then went to Jac's parents house to get ready. Caitlin was dropped off at the hairdressers with Jac's mum. Our hair and make up was done at the house. The kids were getting worked up - Caitlin obviously knew was was going on and got exited, and Mia must have picked up on the atmosphere because she refused to take her nap and then got over tired... Poor little love didn't want to wear her tiara, hold her flowers, or be anywhere away from her parents. Which - considering she was supposed to walk down the aisle with me and Caitlin proved to be a problem!

Jac's brother and mum walked down first, then me and Caitlin, and then Jacs followed on her dad's arm, carrying Mia in the other, and she looked AMAZING! Jac's mum took Mia at the front - who just wanted her dad now - and tried to keep her from crying her poor little heart out.

Caitlin did her reading beautifuly and got a round of applause from the guests, and the pressure finally got to her afterwards when she too had a little cry.

It was all very very moving.... not being a crying type of girl myself, even I was holding back the tears while they exchanged their vows and rings and shared their first married kiss.

I can't belive my best mate is finally married! It onlytook 'em 10 years to get there!

the rest of the do was great too, we headed off for photos, and then a lovely meal was served, and then there was the disco and more food in the form of a buffet... my midnight we were chattered and people were starting to drift off, so I said a good night and good bye to Jacquie and Dave and the girld - who were off on honey moon at something like 5.30 that moring - and finally did cry a little bit (but I think I got away with it)

Things went quiet for a bit after that, until things at Yorkie's work took a turn for the worse!

I'm sat having my lunch between cleaning jobs and my mobile goes off. I figure it'd be Debbie, who was on the verge of loosing her job at the garden centre, and it was. She had been fired and told to get off the site imidiatly.

Story goes as this: Since they took Jerry on last year (at 18.5 grand a year) to be general mamanger money has been tight. In truth, it's been tight for a while but for reasons best known to them selves Yorkie and Debbie's bosses thought they needed to take this guy on. He does nothing. Really... NOTHING! Both Debbie and Simon were made managers last year, and they each manage 1 person (Debbie has Sue, Simon has Little Mark - not Yorkie), meantime Yorkie is managed by no bugger. They have now realised that they need to create a possition for Jerry - who cannot or will not manage the greenhouse Yorkie works in - and have to loose someone. Only who can they get rid of? One of the managers? So that's either Debbie or Simon.

Following this so far?

So they hand both of these guys letters, saying (basically) that the company is in the shit, they have too many over heads, wages bill is too high and will one of them please take volunatry redundancy or else they will fire one of them based on past issued, e.g. disaplinaried etc.

Now, we all know that means that poor ol' Debs is on her way out. they have had issues with Debs for a long time. Her previous involvment with Simon (bastard) and the depression she has suffered as a result haven't helpped matters, and a constant confic with Sue made things worse (or maybe it was the other way round, we can't quite work that out). And she had wound up on a disaplinary as a result of back-stabbing and bitching within the company (aimed at her, no by her).

So on the Monday she was fired.

On the Tuesday Yorkie sounded off about it - and about the terrible way it was handled within the company.... and got suspended for alegedly threating to "stab the owners and general manager"....

But as they are SO disorganised (they make Glenn look like he knew what he was doing) they couldn't send him a letter detailing his suspenstion, so when he went into work the day after they let him come back on a written warning. Oh, and he has to go to Anger Management classes too, if the boss ever gets round to setting any up. Which he wont.

So that's it. That's how things have been. I have a pounding head, and Debbie has just been on the phone to say that she and Marie are on theor way over, both as depressed as me, with cakes for a slagging off of the world for a couple of hours before I go and collect Yorkie and spend the rest of the night kicking the shit out of mosters and deamons on Guild Wars (A great way to vent anger!)