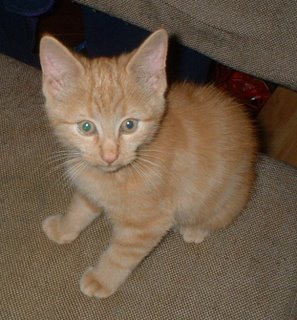 Went to the Marina on Friday and the lads there said that Leona was looking for me, something about a kitten. So I went to find her, and it seems that the third kitten that was found was now in need of a home. The chap who had him also has some dogs which were going for the kitten and he was affraid for the little fellers safety.

Leona asked if there was any chance I could take him... and since I still had the cat arry case in my car from Wednesday and as I was pinning for the other two pretty badly by then, I agreed.

Half an hour later the little ginger cat was in my arms. The guy who had been looking after him was very sorry to let him go, bringing me his little bed and some cat food, and I promised him that the kitten would be well looked after and loved.

I expected Yorkie to hit the roof when he found out what I had done - I spent the afternoon with Jen and I know she would have been happy to take the kitten if Yorkie insisted that we couldn't have him - and when I picked Yorkie up after work the first thing I asked him was "are you in a good mood" which had him thinking I had done someting horrendous - like start redecorating or something. So when I admitted that I had taken this kitten in he was, well, I don't know. Resigned to the fact I suppose!

But he said I could keep him, pointing out that jabs and nutering would cost money. The money mum gave me for my early XMas gift will cover that though and the additional cat food will come out of my half of the budget.

Muppet still does not like kittens, although even she seems to be coming to terms with having a little brother. He's taking no shit from her either though, whenever she hisses at him he hisses right back, and she only bats him round the head when he over steps the mark by 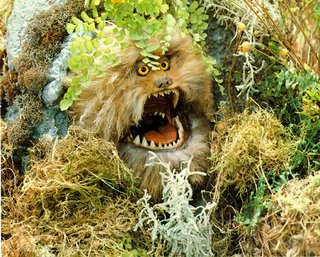 eating her food or gabbing her tail, which is fair enough. They will share the settee though, and even share my lap if they are both tired enough.

It's taken a few days to come up with a name for the little guy, things like Flump, Biscuit, Ginge, Tigger and Chip have been considered, but in the end I've gone for Fizgig because when he hisses, meows, yawns, well, whenever he opens his mouth, he looks like Fizgig from the Dark Crystal!

Welcome to the family little one!