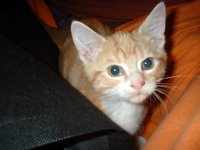 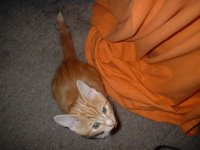 These two adorable little faces have been part of my life for the last 4-5 days.

Saturday morning I went to Glasson Dock as normal and popped into the shop to see Leona, who had a cat carry case by her feet. I know she has a couple of cats so I assumed that she had to take one to the vets or something. When she finished on the phone she said to me "Want a couple of kittens?"

Silly question really... given half a chance I would fill my house from top to bottom with cats, I wanted to BE a cat when I was a kid! So I called Yorkie up and asked if we could have them. Being the sensible bloke that he is (no, really, he is) he reminded me that we've got a wedding coming up and we can't really afford to pay for two lots of kitty jabs and nuterings, not to mention the additional cat food and kitty litter. Plus Muppet HATES kittens....

So I called mum.

Now, the story behind these lovely little ginger fur balls is a very sad one. Friday evening they were found by the Marina, one was in the water and close to drowning, so they were resuced by (I assume) the staff and Lenoa dried them off and kept them warm down her top. She named the wet one Splash, and his brother Nosy. No one clamed them so she took them home for the night and to the vets for a checking over. Full bill of health, and the shock Splash was suiffering from would be sorted out with some TLC. Leona would love to keep them, but, as she puts it, with two disabled parents, a teenage daughter and two cats already, she had neither the time or the space to look after them. Animal Protection had been called and would collect them on Tuesday.

So I recount this sad and sorry tale to mum, who has a soft spot for cats at the best of times and had said to me that she wasn't "looking for a cat, but if one in need of a home lands on my lap, I'll take it in"... She struggled with the idea of two cats for a while, asking if she could take just one - the soggy and sand one - but I protested that since they had already lost their home, their mum, and almost their lives, they should at least be allowed to stay together (manipulative, I know, but it's for a good cause). She said she's call me back that evening.

I told Leona that they were as good as re-homed, and that I would call her that evening to let her know for sure having assured her that mum knew about cats, had had plenty of cats in the past, was already set up with a cat flap etc. She told me she hoped mum would say yes because that sounded perfect.

I called mum when I got home, she still wasn't sure, so laid it on thick with the "but they really need a good home mum, and you know you love cats, it's not home without a cat". Less than two hours later she called me back, "Go get them then" she says!

So I charge back to the Marina, via Sainsbury's to pick up kitten food and some more litter, and get to Leona and the kittens just before closing time and bring them home.

Muppet is less than impressed with the kittens. She wants to remain an only child they way she likes it and refused to have anything to do with them, then went on hunger strike until she was reassured with many many loves and cuddles that she was still number one cat in our lives. She always growled and hissed if they went anywhere near her though.

So for the last few days they have run a muck through our downstairs, although they are very clean and always used their litter tray (also Nosy missed onced - he was sat in it but his little bum was over hanging the edge. can't shout at him for that).

Splash was - and still is really - very timid, not wanting many cuddles and not being too keen on being picked up, although by last night he was climbing on me and purring, and letting us stroke his furry little head so that's progress. Nosy lives up to the name and was into everything right away. He's very affectionate! Loves cuddles, stockes, tummy tickles, and licking you. Costantly licking you! Your hands, face, neck, ears, hair.... any bit of you he could get hold of: lick lick lick! And I can tell them apart now. Nosy has a whiteish tip to his tail and very big wide round eyes. Splash has a ginder tail tip and almond shaped eyes that make him look like his cross, or up to something, all the time.

Mum called last night and said "I've insured them already! I've kept one as Splash, but I've named the other Amber, you know, after Little Amber" who was a kitten we had years ago, a lovely sweet gentle cat that some bastard shot with a pellet gun, disintergrating one kidney, nicking the other and purferating his intestines. Poor little bugger died and he was only about 6 months old, and very much loved and missed. So Nosy is now Amber II in memory of that little one.

I took them over to mums this afternoon, I was heading into Burnley anyway before the kittens arrived to help a friend out (Simons computer needed to go to a workshop in Burnley to be mended) and introduced them to their new home, and more importantly, their new mummy. They seem to have settled right in, loving my mum's huge house and I can see they can't wait to get out into that massive garden once they've had their shots. I had to go without saying goodbye because I have grown very attached to the little sods - even sleeping in the front room last night with all three cats instead of going to bed - and I would have cried my eyes out. It took every inch of strength not to ask mum if they seemed to miss me or not after I'd gone, because after all they are cats and they wouldn't have noticed, so long as they have food, water and clean litter they don't care who provides it.

Still - they're at mum's not a million miles away with a stranger, so it's not like I wont see them again. I just wish I could have kept them myself.

A third kitten had turned up at some point, another little ginger one. But he is being kept by one of the people on the Marina, so hopefully he'll be ok too. I wonder if there any more in need of a home.....