I feel fuggy and sleepy and grumpy. I want to sleep. I have a headache. Still, New Year is New Year and we'd been invited to Jacquies so I wasn't going to stay home and go to bed early! I have the rest of the year to be ill. We were late again - as usual. I made a point of fibbing to Yorkie about what time we had to be there. I told him 5pm, when I'd arranged 6pm with Jacs. We arrived at 20 past 6. That man can drag his heals for Britain!!!

Jacs was still at work so David entertained us for a bit until she got home. Caitlin was allowed up until midnight, but Mia went off to bed. Lea came round too and we all had a Chinese Take Away (strange place that doesn't do sweet and sour pork balls, but instead sent battered pork with no sauce, not even dipping sauce) and played Lord of the Rings Trival Pursuit. Me, Jacs and Lea Vs Yorkie, Dave and Caitlin. Caitlin went to bed after midnight and I think Lea wished she had done - LOTR not being her thing I think - but regarless OUR TEAM WON! With 6 pie's to 3 (or it might have been 6 to 4, but we kicked butt regardless)

We turned in about 3am, and then poor Mia woke up. Keeping Jacs and Dave up for the rest of the night. Poor little mite's not too well either. 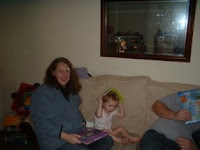 New Years day was busy, after sausage butties (thanks Dave, yum) and a brew we had to head off from Jacs and visit my Nan. We still had her presents from us and from my mum, but with us working and Nan being ill we'd not had chance to bring them over. Two of my aunts were there; Ann (who is living there with her 3 kids and dog until she can get her abusive, alcholic git of an ex husband out of her house) and Brenda (who I haven't seen in ages, but who is going with Nan to France to see my dad next week) and we had a bit of a catch up. I think poor Yorkie was a bit stunned by being surrounded by so many short loud Oakes women in one place! Still, he survived it.

From there we went home, and I went to bed because I felt poorly. I still do! I've been to work the last couple of days, and took Fizgig for his last set of jabs, and my brain hurts! So I'm going to sloap off and have a rest before picking Yorkie up from work too. Apparently we have to go shopping tonight. And I really don't want to!