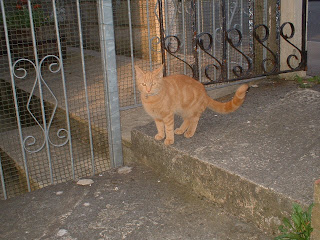 My adorable little ginger baby-boy cat has turned into a KILLER!

In the last week he has brought me 2 birds and a mouse. The second bird was still alive - with a huge hole in it's back. I tried to free it, you know, give it at least a chance at life, but I'm not hopeful for the poor bugger. It was in a bad way.

The first one was dead. I found it in the front room next to my shoe when I was poorly. Yorkie
got rid of that one. We didn't know for sure which cat brought it in, but Muppet is a butterfly hunter, not a bird hunter. So we guessed it must be Fizgig. It was a small bird, maybe a fledgeling he'd found. 2 days later I was sat at the computer and he came trotting in and stared to play with something. The something ran into a courner and I saw it... a sparrow. That was the live one I caught and put outside. Tonight, just as Yorkie and I were tucking into our dinner, he dropped into the living room with a dead mouse! Which I binned!

I guess it means we've brought him up well. All thoughs hours of paying with toy mice, jingle balls and things on strings. He's a proper cat.

Doesn't mean I have to like it though! YUCK!