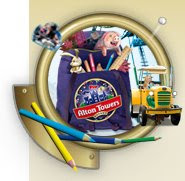 I got a day off from being Charlie Walker: Ops Manager/Mummy today and had a day being Chig again at Alton Towers. I miss being Chig sometimes. Chig likes having fun! (nothing beats being Mummy though).

It's been the works 'Do', a moral boosting exercise as the credit crunch and winter and being understaffed blah blah blah has pretty much all of us ground down.

And it was AWESOME!

Being half term not all the rides where open. This is the list off the web site (which we should have checked before going as we were a tad disappointed at none of the water rides working... or Nemesis!)

Not all of us are white knuckle fans (I bloody well am! And so is Ian who was bragging about how often he's been), Warehouse Paul looked like he was going to be sick on Spinball - although he did go on TWICE in the end, and he loved Air. Mirek did very well, and even Steven had a good go. Diane LOVES them really, but shuts her eyes and screams all the way round. We had to drag her on to Oblivion, but she and I want back to Air for a second ride while everyone else qued up for a 2nd go. Hex was a bit of a disappointment, but nice enough.

It was a good do though, and we all had a laugh. Donna and Zoe got a taste of the real me, stating that they didn't know what I was really like: a BAD girl! (me???) Not as bad at Trish though, who treated us girls to the pretty raunchy photos on her phone while we debated what the LNL Guys might be like in bed (not my idea, I'm not THAT bad of a girl these days).

I got some photos, one of me and Chang, and one of me and Diane, on some of the rides. Gregor took a load of photos of his own, and on the way back Rob was taking photos of people sleeping, like IT Paul, Dave, Chang & Gregor.

A little gutted that everyone else went on for a curry once we got back to Lancaster and I couldn't join them. I dashed back home so that Mark could go out to a birthday meal - infuriatingly at the SAME Indian restaurant!!

However, I am shattered now - and starving with out MY curry, so an evening of putting my feet up watching what I want on telly is pretty welcome. And I did get to see Jack before he went to bed and give him the (over priced) cuddley toy I bought him. I must be getting old.... 30 is not far away!