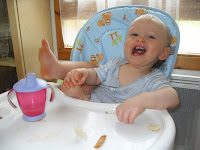 So we've been back to France! As usual Jack was a little STAR on the plane, opting to sleep for most of the flight to and from Geneva. I was very proud of our little man. When we came through customs Dad and Fay were waiting for us at the fence/barriar thingumy. We said hello, passed Jack over, and walked around, half expecting him to kick off and start screaming because he had been handed to 2 people he didn't know very well while mummy and daddy 'walked off'. But he didn't. He smiled at each of them! And didn't even give a hint of concern!

We had a bit of a quiet time this trip, mostly just letting Jack run around as much as he liked in his nappy & t-shirt, or nappy & shorts. He doesn't do well with the heat, just like his dad. But Jack LOVED being nearly nude all the time! The best toys in the world right now are three globe style metal candel holders, they bang and crash and clatter and chime and spin! I think we might have to go and BUY some! He also loved his first ever box of duplo and first ever football! (he's such a BOY!) 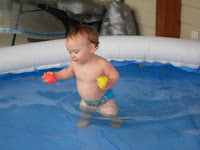 He also had a splash about in Pappee's new pool! He was a bit unsteady to start with, slipping over and dunking his little head a bit, but he didn't cry or fuss. Just came over to one of us for a bit of reasurance, then toddled off again. By the time he was starting to get chilly he was managing to hold his face out of the water if he dunked! He did NOT like being taken out of the pool and dried off once we desided it was getting TOO cold (by the goosebumps and shivering bottom lip), as he hadn't had enough fun yet!

We're already looking at going over again before the end of the year, hopefully over my dad's birthday again! Maybe that time Jack will be talking, and swimming, and kicking that football & rugby ball we've got for him.